Police say that 15 bodies including six children have been found after a raid in east Sri Lanka on militants linked to the Easter bombings.

Police spokesman Ruwan Gunasekara gave the figures early Saturday after a gunfight between soldiers and the suspected militants near Sammanthurai. 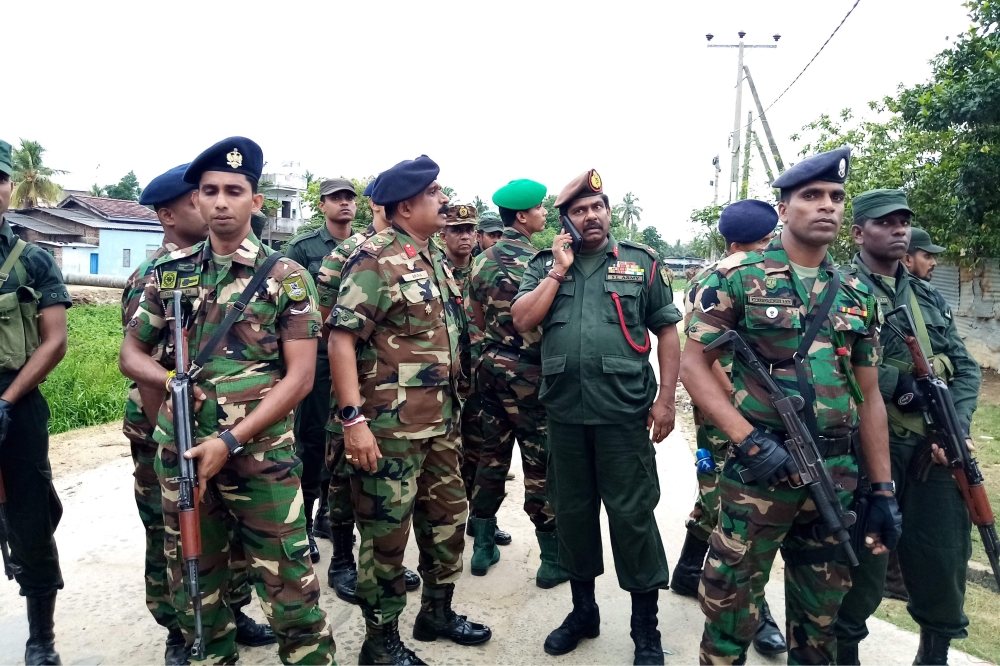 The gunbattle began Friday night after police tipped off soldiers to a suspected safe house, where authorities say the militants set off three explosions and opened fire. At least three others were wounded in the attack.

Gunasekara says some of the dead likely were militants who blew themselves up in suicide bombings.

Earlier, the military said at least one civilian had been killed in the attack.

Sri Lanka lowers attacks toll to 253 as some 'double-counted'

Sri Lankan authorities on Thursday revised the toll from Easter bombings down to 253, from the previous figure of 359, explaining that some of the badly mutilated bodies had been double-counted.

The health ministry said medical examiners had completed all autopsies by late Thursday, and had concluded that several victims killed in the series of attacks had been counted more than once.

The official toll released by the police was reduced by 106 after the reconciliation of autopsy and DNA reports, the ministry said in a statement.

Sri Lanka's former navy chief says the father of two of the Easter suicide bombers has been arrested on suspicion of aiding his sons.

Jayanath Colombage, who now is a counter-terrorism expert at the Pathfinder Foundation, confirmed the arrest to The Associated Press on Thursday.

Sri Lankan police could not immediately be reached for comment.

A man with a backpack is seen in Shangri La hotel elevator in Colombo, Sri Lanka. (Reuters)

Hemasiri Fernando, the most senior bureaucrat at the ministry, sent a letter of resignation to President Maithripala Sirisena, the official said.

"He told the president that he was accepting responsibility and resigning so that the president can make a new appointment," the official said, speaking on condition of anonymity.

All of Sri Lanka's Catholic churches have been ordered to stay closed and suspend services until security improves after deadly Easter bombings, a senior priest told AFP Thursday.

"On the advice of the security forces we are keeping all churches closed," the priest said. "There will be no public mass said until further notice."

Security has already been stepped up at churches across the country, government officials said.

A string of suicide bomb attacks targeting three churches - two of them Catholic - and three hotels on Sunday killed at least 359 people and wounded hundreds.

The attacks came as churches were packed with worshippers attending Easter Sunday services.

Chilling CCTV footage has emerged showing a suicide bomber calmly patting a child on the head and shoulder moments before he walked into a packed Sri Lankan church, unleashing carnage.

The images capture the final seconds of serenity before the calm was shattered with a series of coordinated attacks that would between them claim more than 350 lives at six sites across Sri Lanka. 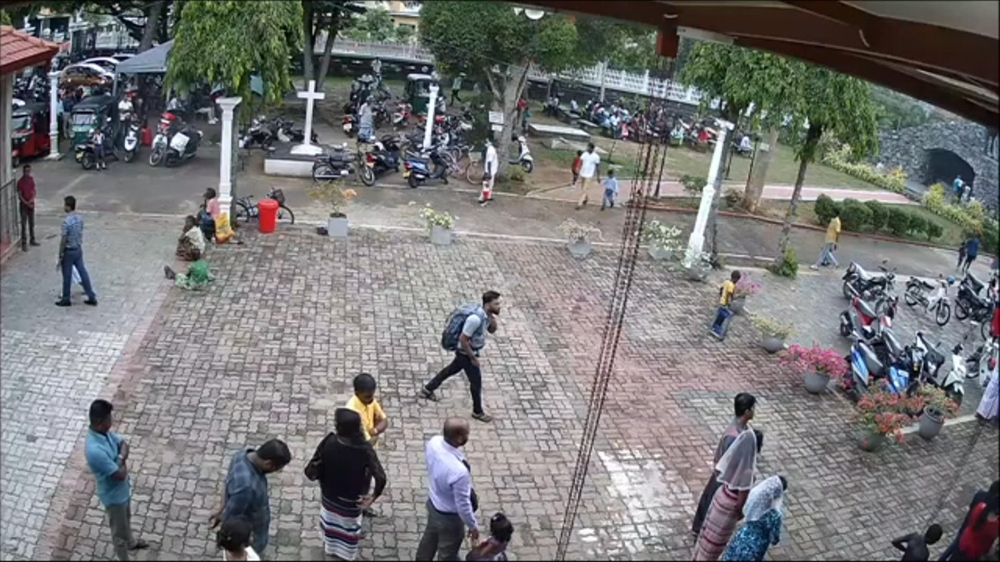 Security camera footage from outside St Sebastian's Church in Negombo shows a bearded man in a light blue shirt, navy trousers and sandals appear on a pathway and cross a courtyard outside the church.

As he approaches his target, he passes a young girl and briefly pats her head and shoulder, with the young girl glancing up at him as he continues on towards the church.

The girl is the granddaughter of Dilip Fernando. The 66-year-old retiree had come to St Sebastian's for Mass, but seeing how crowded it was, decided to try and find a service elsewhere.

That decision probably saved their lives. Some of his family, including his granddaughter, stayed but were outside the church and survived.

Inside, the service was drawing to an end and the hundreds who crammed in to celebrate Easter Mass were preparing to leave.

Those who could not find a seat in the packed church had gathered outside to listen, some holding children in their arms.

Captured from another camera, the suspect can be seen leaning forward while walking, the straps of his backpack fastened across his waist and chest, indicating the weight of the deadly load.

Those gathered outside the church scarcely give him a second glance, while inside, the pews are packed with worshippers, young children fidgeting and ceiling fans whirling against the heat.

The suspect walks past two open doors connecting the church to the covered passageway outside, and enters the church through the third.

He takes a few steps towards the central aisle and the altar.

Then the footage stops.

The bomb he detonated ripped through the church, killing dozens in what is believed to be the deadliest attack in Sunday's carnage.

Fernando's extended family, who were sitting outside the church, said they had seen the bomber.

"At the end of the mass they saw one young man go into the church with a heavy bag," Fernando said.

"He touched my granddaughter's head on the way past. It was the bomber."

The toll in a series of suicide bomb blasts on Easter Sunday targeting hotels and churches in Sri Lanka has risen to 359, police said Wednesday.

The additional deaths were the result of the wounded dying of their injuries. At least 500 people were injured in the attacks.

Overnight, Sri Lankan police carried out fresh raids, detained 18 more people in their hunt for those involved in the attacks.

Nearly 60 people have been detained since the Sunday blasts, which ripped through high-end hotels and churches packed with Easter worshippers in the capital Colombo and beyond.

The death toll from multiple suicide attacks at churches and hotels in Sri Lanka over the Easter weekend rose to 310 on Tuesday, according to the Deutsche Presse-Agentur, DPA.

Police said that the increase was due to more people succumbing to injuries with over 500 others still in hospital.

The country remains under a state of emergency from late Monday as authorities aimed to maintain security and essential services during investigations into the bombings.

Sri Lankan Police on Monday confirmed that 290 people were killed following multiple attacks on churches and luxury hotels in Colombo and other cities on Sunday.

A police spokesman said that the death toll rose to 290, while the injured crossed 500 mark.

Nine bombings of churches, luxury hotels and other sites on Easter Sunday killed more than 200 people and wounded hundreds more in Sri Lanka’s deadliest violence since a devastating civil war in the South Asian island nation ended a decade ago.

Defense Minister Ruwan Wijewardena described the blasts as a terrorist attack by religious extremists, and police said 13 suspects were arrested, though there was no immediate claim of responsibility.

Wijewardena said most of the bombings were believed to have been suicide attacks.

The explosions — mostly in or around Colombo, the capital — collapsed ceilings and blew out windows, killing worshippers and hotel guests in one scene after another of smoke, soot, blood, broken glass, screams and wailing alarms. Victims were carried out of blood-spattered pews.

“People were being dragged out,” said Bhanuka Harischandra, of Colombo, a 24-year-old founder of a tech marketing company who was going to the Shangri-La Hotel for a meeting when it was bombed.

“People didn’t know what was going on. It was panic mode.”

He added: “There was blood everywhere.”

Most of those killed were Sri Lankans. But the three bombed hotels and one of the churches, St. Anthony’s Shrine, are frequented by foreign tourists, and Sri Lanka’s Foreign Ministry said the bodies of at least 27 foreigners from a variety of countries were recovered.

At least 207 people were killed and hundreds more wounded in eight bomb blasts that rocked churches and luxury hotels in or near Sri Lanka's capital on Easter Sunday.

The U.S. said “several” Americans were among the dead, while Britain, China, Japan and Portugal said they, too, lost citizens.
The Sri Lankan government imposed a nationwide curfew from 6 p.m. to 6 a.m. and blocked most social media including Facebook and YouTube, saying it needed to curtail the spread of false information and ease tension in the country of about 21 million people.

Prime Minister Ranil Wickremesinghe said he feared the massacre could trigger instability in Sri Lanka, and he vowed to “vest all necessary powers with the defense forces” to take action against those responsible.

The Archbishop of Colombo, Cardinal Malcolm Ranjith, called on Sri Lanka’s government to “mercilessly” punish those responsible “because only animals can behave like that.”

Police spokesman Ruwan Gunasekara said at least 207 people were killed and 450 wounded. He said police found a safe house and a van used by the attackers.

The scale of the bloodshed recalled the worst days of Sri Lanka’s 26-year civil war, in which the Tamil Tigers, a rebel group from the ethnic Tamil minority, sought independence from the Buddhist-majority country. The Tamils are Hindu, Muslim and Christian.

Sri Lanka, situated off the southern tip of India, is about 70 percent Buddhist.
Scattered incidents of anti-Christian harassment have occurred in recent years, but nothing on the scale of what happened Sunday.

There is also no history of violent Muslim militants in Sri Lanka.

However, tensions have been running high more recently between hard-line Buddhist monks and Muslims.

Two Muslim groups in Sri Lanka condemned the church attacks, as did countries around the world, and Pope Francis expressed condolences at the end of his traditional Easter Sunday blessing in Rome.

“I want to express my loving closeness to the Christian community, targeted while they were gathered in prayer, and all the victims of such cruel violence,” Francis said.

Six nearly simultaneous blasts took place in the morning at the shrine and the Cinnamon Grand, Shangri-La and Kingsbury hotels in Colombo, as well as at two churches outside Colombo, according to a Sri Lankan military spokesman, Brig. Sumith Atapattu.

A few hours later, two more blasts occurred just outside Colombo, one of them at a guesthouse, where two people were killed, the other near an overpass, Atapattu said.

Also, three police officers were killed during a search at a suspected safe house on the outskirts of Colombo when its occupants apparently detonated explosives to prevent arrest, authorities said.

The Shangri-La’s second-floor restaurant was gutted, with the ceiling and windows blown out. Loose wires hung down and tables were overturned in the blackened space. From outside the police cordon, three bodies could be seen covered in white sheets.
Foreign tourists hurriedly used their cellphones to text family and loved ones that they were OK.

Visitors from around the world come to Sri Lanka to see elephants, tea plantations, ancient Buddhist monuments and other sights.

“I had a sense that the country was turning the corner, and in particular those in the tourism industry were hopeful for the future,” said tourist Peter Kelson, a technology manager from Sydney.

“Apart from the tragedy of the immediate victims of the bombings, I worry that these terrible events will set the country back significantly.”
Locals who work in Sri Lanka’s vital tourism industry were shocked and upset by the bloodshed.

“After so many years, we’ve started again,” said Gamini Francis, 56, a long-time hotel worker. “A lot of people are going to lose their jobs. 100% sure. It’s tragic. Crazy people killing innocent people.”

Sri Lankan forces defeated the Tamil Tiger rebels in 2009, ending a civil war that took over 100,000 lives, with both sides accused of grave human rights violations.

Harischandra, who witnessed the attack at the Shangri-La Hotel, said there was “a lot of tension” after the bombings, but added: “We’ve been through these kinds of situations before.”

He said Sri Lankans are “an amazing bunch” and noted that his social media feed was flooded with photos of people standing in long lines to give blood.