Super Typhoon Mangkhut - the biggest storm of the year - smashed through the Philippines on Saturday, claiming its first victims as two women were killed when a rain-drench hillside collapsed on them and another drowned in Taiwan.

The massive storm cut a swathe of destruction when it struck the northern tip of Luzon island, threatening the lives and homes of roughly four million people.

"As we go forward, this number will go higher," Ricardo Jalad, head of the national civil defence office, told reporters, referring to the death toll.

As the powerful storm left the Southeast Asian archipelago and barrelled towards densely populated Hong Kong and southern China, search teams in the Philippines began surveying the provinces that suffered a direct hit.

"We believe there has been a lot of damage," said Social Welfare Secretary Virginia Orogo as thousands of evacuees took refuge in emergency shelters.

Mangkhut was packing sustained winds of 170 kilometres (105 miles) per hour and gusts of up to 260 km per hour as it left the Philippines.

Super Typhoon Mangkhut slammed into the northern Philippines on Saturday with violent winds and torrential rains, as authorities warned millions in its path of potentially heavy destruction. 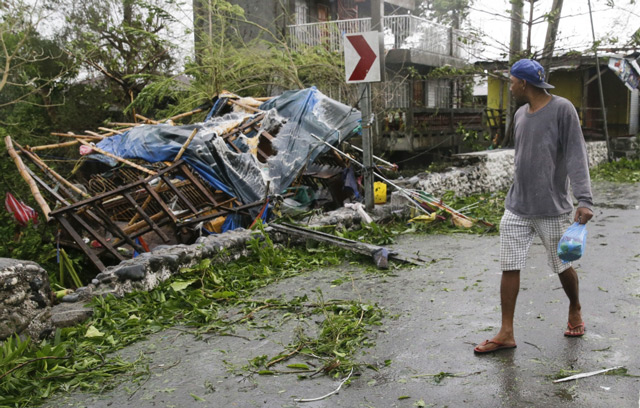 The massive storm, which forecasters have called the strongest typhoon this year, blew down trees, tore off roofs and knocked out power when it made landfall on the island of Luzon in the pre-dawn darkness.

As it barrelled west toward China across the disaster-prone archipelago, the storm's gusts strengthened up to 330 kilometres (205 miles) per hour but its sustained winds had weakened to 185 km per hour. 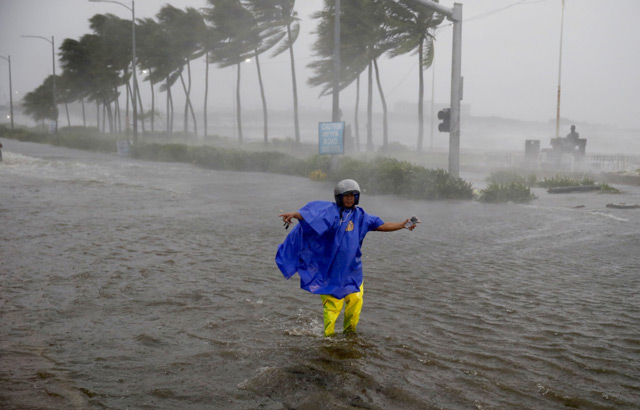 "As much as possible, stay indoors," Chris Perez, a forecaster for the state weather service, warned the roughly four million people in the path of the storm after it landed at 1:40 am (1740 Friday GMT).

An average of 20 typhoons and storms lash the Philippines each year, killing hundreds of people.

Thousands of people fled their homes in high-risk areas ahead of the storm's arrival because of major flooding and landslide risks.

Authorities hiked the storm alert on Friday to its second-highest level in northern Luzon provinces and mobilised rescue teams.

The elevated warning level carried risks of "very heavy" damage to communities hit by the typhoon and a storm surge that was forecast to hit six meters in some areas, the weather service said.

Urgent preparations as super typhoon closes in on Philippines

Preparations were in high gear in the Philippines on Friday with Super Typhoon Mangkhut set to make a direct hit in less than 24 hours, packing winds up to 255 kilometres per hour and drenching rains.

Thousands fled their homes on the Philippines' northern coastal tip ahead of the early Saturday landfall of what is expected to be the disaster-prone nation's fiercest storm yet this year.

Businesses and residents on Luzon island, which is home to millions, were boarding up windows and tying down roofs that could be sheared off by winds forecast to gust as high as 255 kilometres (160 miles) per hour.

"The rains will be strong and the winds are no joke... We may have a storm surge that could reach four storeys high," Michael Conag, a spokesman for local civil defence authorities told AFP.

"This could destroy houses, especially the makeshift houses. Those are the ones most common in coastal areas." 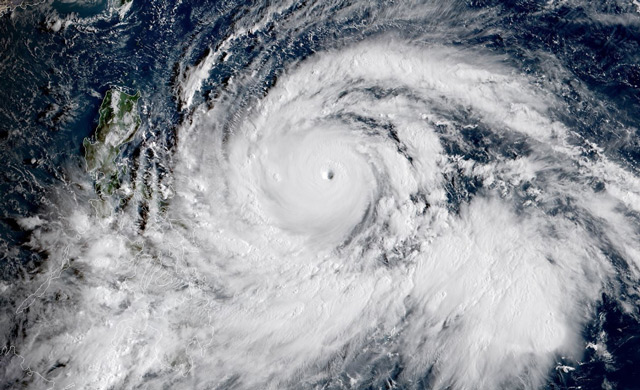 Heavy rains and high winds were just starting to pound the far northeastern tip of Luzon on Friday, but there have been no reports of major damage or flooding.

Farmers in the region, which produces a significant portion of the Philippines' corn and rice, were rushing to bring in crops that could be destroyed by flooding.

At least four million people are directly in Mangkhut's path, which is predicted to move on to China's heavily populated southern coast - including Hong Kong - this weekend.

"We are really frightened. They say it (typhoon) is so strong," said Delaila Pasion, who had fled her home in the northern Philippines. "We were too scared to remain."

"During the previous monsoon rains, half of our house was destroyed so I wanted to take my grandchildren to safety," she told journalists on Thursday.

Typhoon Mangkhut bears down on millions in Philippines

A super typhoon roared toward the Philippines on Thursday, packing fierce winds and heavy rains that are expected to strike the disaster-prone nation at the weekend before moving on to China.

Typhoon Mangkhut, which has already blasted through the Northern Mariana Islands, is speeding across the Pacific with winds that can gust as high as 255 kilometres (160 miles) per hour.

Authorities said some 10 million people in the Philippines are in the storm's path, not including millions more in heavily-populated coastal China.

Thousands began evacuating in seaside areas of the northern tip of the main Philippine island of Luzon, where the storm is expected to make landfall early Saturday.

"The pre-emptive evacuation is going on in our coastal municipalities, the villages that are prone to storm surge," local government spokesman Rogelio Sending told AFP. "We are going to evacuate more."

An average of 20 typhoons and storms lash the Philippines each year, killing hundreds of people and leaving millions in near-perpetual poverty.

The country's deadliest on record is Super Typhoon Haiyan, which left more than 7,350 people dead or missing across the central Philippines in November 2013.

The state weather service said Mangkhut will be the strongest typhoon so far this year, with sustained winds of 205 kilometers per hour.

The typhoon is expected to boost the intensity of seasonal monsoon rains that have already caused widespread flooding in central Luzon, a mainly farming region north of capital Manila.

Hong Kong is also in Mangkhut's sights and preparations there were already underway, though the storm was not expected to hit until Sunday.

Social media users and radio commentators in Hong Kong said they were stocking up on food and supplies.

The Hong Kong Observatory warned residents to prepare for the storm, saying it posed a "considerable threat".

The Philippines state weather service said heavy rains and strong winds are expected from Friday over the north and centre of Luzon, along with rough seas on the coasts.

The International Federation of Red Cross and Red Crescent Societies said it expects "substantial damage" on the Philippine path of Mangkhut.

Storm surges of up to seven metres (23 feet) are expected to hit coastal areas, it said, while heavy rains could trigger landslides and flash floods.

The civil defence office in Manila said towns and cities on Mangkhut's path are preparing government buildings as evacuation centres, stockpiling food and other emergency rations, and preparing rescue teams and equipment.