Sydney to Rio via London: World's pyrotechnic welcome to 2014

The world welcomed in 2014 with a series of spectacular firework displays as a wave of pyrotechnic extravaganzas swept around the globe to celebrate the New Year.

Some 2.3 million thronged Rio de Janeiro's iconic Copacabana Beach for a raucous celebration about 24 tonnes of fireworks launched offshore lit up the sky. Fireworks light up the London skyline and Big Ben just after midnight on January 1, 2014 in London, England. Thousands of people lined the banks of the River Thames in central London to see in the New Year with a spectacular fireworks display.   (Getty Images)

Europe joined in the party with a giant salvo in London, after Dubai broke the work record for the biggest-ever fireworks show and Sydney got the ball rolling ahead of Asia with a dazzling display.

In London, huge cheers went up as parliament's clock tower chimed in 2014, as people packed the banks of the River Thames to watch the pyrotechnics at the London Eye observation wheel.

About 50,000 took part in "the world's first multi-sensory fireworks display", when peach snow, edible banana confetti and orange-scented bubbles descended on a section of the crowd.

China: Visitors watch a light show as part of a New Year countdown celebration on The Bund in Shanghai January 1, 2014. (REUTERS)

In Europe, Berliners partied at the Brandenburg Gate, while hundreds of thousands in Paris thronged the Champs Elysees.

"Paris is wonderful tonight," said Hu Lichu, a Chinese woman in her 60s who came with her husband.

Russians got two different versions of President Vladimir Putin's New Year address after a "technical glitch" meant its Far East watched an earlier pre-recorded tape that made no mention of the Volgograd suicide attacks. 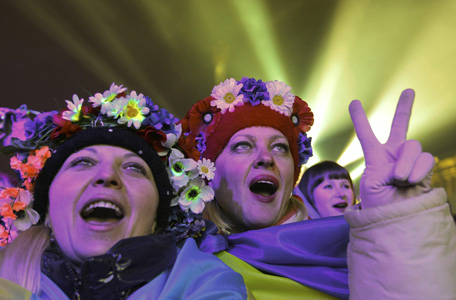 Thousands of cheering Spaniards in Madrid saw in 2014 by gobbling down twelve grapes -- one with each clock chime -- in a New Year tradition.

Latvia officially adopted the euro currency at the stroke of midnight, making the former Soviet state of two million people the 18th member of the crisis-hit eurozone.

In Ukraine, tens of thousands saw in the new year at Kiev's Independence Square, the centre of mass protests for the past month after Kiev ditched a pact for closer ties with the EU. 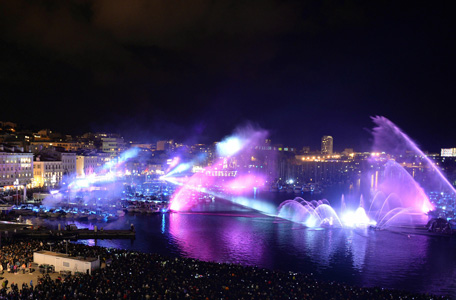 France: Pyrotechnic show company "Group F" performs with lights in the Vieux Port (Old Port) of Marseille, southern France, on December 31, 2013, as part of New Year celebrations on the last day of the Marseille-Provence 2013 European Capital of Culture. (AFP)

One man was killed by fireworks in the Netherlands and another in France.

Sydney spectacular starts the showKiribati and Samoa in the Pacific were the first to see in the New Year at 1000 GMT Tuesday, in a wave of celebrations that will finish on the United States' remote Howland and Baker Islands at 1200 GMT Wednesday.

Sydney had the first of the world's major pyrotechnic shows, with seven tonnes of explosives lighting up Australia's biggest city. 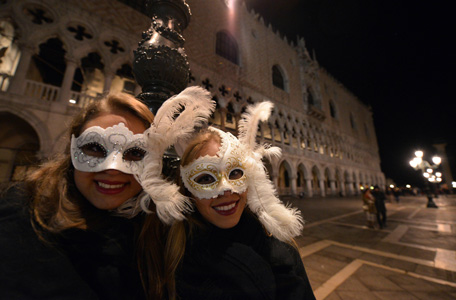 Venice: People pose with carnival's masks as they celebrate the New Year at the Piazza San Marco in Venice, on December 31, 2013. (AFP)

Fireworks shot off the Opera House for the first time in more than 10 years in a show which attracted some 1.5 million people.

In Antarctica, the Akademik Shokalskiy ship rang in the New Year with a special song lamenting the "great shame we are still stuck here", after a week trapped in the ice.

Hong Kong's skyscrapers were lit up by a dazzling eight-minute pyrotechnics show fired from a one-kilometre line of barges.

An estimated 400,000 revellers packed the shoreline, while teenagers gathered with signs offering "free hugs" to passers by.

In Japan, millions visited local temples and shrines to greet the new year with contemplation and to pray for peace for relatives.

For areas ravaged by Super Typhoon Haiyan in the Philippines, celebrations were muted.

In the ruined farming village of San Isidro, residents are still grappling with the overpowering stench of death as 1,400 corpses stacked in black body bags lay in a field, more than seven weeks after the tragedy.

In Singapore, thousands of white spheres were launched on Marina Bay, holding residents' wishes for 2014.

Mumbai revellers celebrated a court victory which pushed back closing time in bars and restaurants to 5:00am instead of 1:30am.

About a million people were to gather in New York to watch the traditional New Year's Eve ball-drop over Times Square.

South Africa bade farewell to 2013 with a 3D video send-off of Nelson Mandela as the country entered the New Year without its beloved icon.

His face was mapped onto Cape Town's city hall where in 1990 he gave his first speech after 27 years in apartheid incarceration.

But on a day of global revelry, it was left to North Korea to strike an isolated sour note, with the reclusive nation's leader Kim Jong-Un warning grimly of a "massive nuclear disaster" if war ever broke out on the divided Korean peninsula again.