Tear gas in Paris, but fewer protesters and bigger demands

A protest movement that has brought the French into the streets for five Saturdays in a row in a major challenge to President Emmanuel Macron lost momentum in its latest nationwide outcry, but the smaller crowds pushed fervently for one of their expanding demands, a citizen’s referendum to help define policy.

The most resonant call Saturday was a leap from the demand for relief from fuel tax hikes that gave birth to the protest in mid-November by rank-and-file French wearing yellow safety vests to slow vehicles at the traffic circles that dot France’s countryside.

Interior Minister Christophe Castaner announced in a tweet the death of an eighth person since the start of the protests, implying it occurred at a traffic circle, some of which have been manned day and night by protesters.

“Traffic circles must be freed and the security of all must again become the rule,” he said, in a new effort to tamp down a movement that appears to be losing momentum.

The government put 69,000 security forces into the streets and called for calm after the last two Saturdays of major violence, including vandalization of the outside and inside of the Arc de Triomphe, which cradles the Tomb of the Unknown Soldier.

“Protesting is a right. So let’s know how to exercise it,” the French government tweeted.

Some 8,000 police, with 14 armored vehicles and water cannons, were out anew in Paris to guard against property destruction and looting that marred the two previous protests.

They fired rounds of tear gas into crowds on the famed Champs-Elysees, where chic shops and restaurants were boarded up, and at dusk turned water on protesters bundled against frigid weather to disperse them.

Police said 115 people were taken into custody in Paris, most for banding together to commit acts of violence. 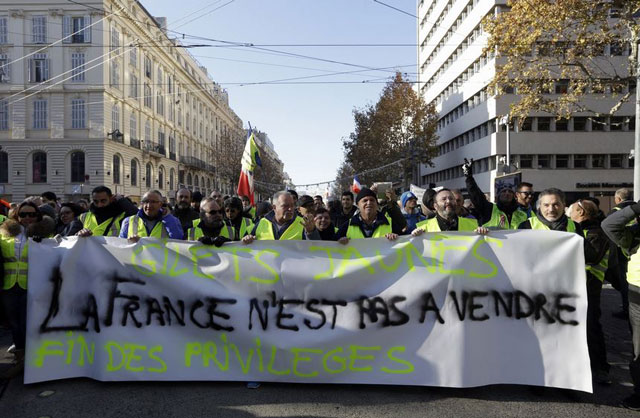 Police in riot gear were seen tackling one protester and dragging him off the Champs-Elysees.

Police estimate Paris protesters numbered 3,000 maximum — less than half the number a week ago — and the sharp downturn in violence was reflected in demonstrations across the country.

But the smaller crowds were fervent — and more demanding, with signs carried high or scrawled on the backs of vests calling for a referendum system that would let citizens directly impose national policies.

Among the yellow vests on the Champs-Elysees was Francis Queruel, a 70-year-old retiree from the small town of Goussainville, about 35 miles (60 kilometers) southwest of Paris, who said he was angered by “the violence of money,” whereby the rich thrive and the rest are squeezed.

“There are 9 million poor in France and people who work but have no money at the end of the month to eat,” said Queruel.

While he said he has a good pension at 3,600 euros a month, he complained it’s not indexed to the cost of living. Above all, Queruel worries for his grown children and the French who can’t make ends meet.

“When you’re hungry, it’s terrible,” said Queruel. “People were silent for a long time and now it’s the eruption of a volcano,” he said.

Without any clear leadership, the yellow vest movement has attracted a wide range of disgruntled people across France’s political spectrum, including political parties trying to win new backers.

On Monday, Macron, whose popularity is plummeting, offered a package of measures in a bid to placate protesters, including a 100-euro monthly increase to the minimum wage.

However, he refused to reinstate a wealth tax he slashed at the start of his presidency, a move that enforced a perception that he is the “president of the rich.”

Lionel Fraisse, 63, a retired worker for the state agency that runs Metros and suburban trains, said the measures were simply “to put the people to sleep.”

Fraisse, who arrived from the Essonne region south of Paris with former colleagues, said what he wants most is for Macron “to validate his legitimacy” with a referendum.

Until then, “the movement must lose neither its vigor nor its legitimacy,” he said.