The death toll in the collapse of a Shanghai commercial building that was undergoing renovation rose to 10 overnight after three more victims were added to the grim tally, the city government said Friday.

About half of the low-rise building collapsed around midday on Thursday, crushing construction workers under piles of toppled concrete pillars and shattered wooden beams.

Authorities said 25 people had been found in the rubble, 10 of whom had succumbed to their injuries.

The latest announcement on a city government social media account did not make clear whether any others were still missing, but added that search and rescue work was "basically finished."

Medical personnel were making "all-out efforts" to treat the injured, the announcement said.

Rescue personnel pulled bloodied and dust-coated workers out from the rubble throughout Thursday afternoon and evening, according to AFP journalists at the scene.

The building had previously been used as a dealership for Mercedes-Benz cars, the national emergency ministry has said.

But the property had changed hands and was being redeveloped as a mixed-use arts and innovation site, according to Chinese media reports.

China is no stranger to building collapses and deadly construction accidents, which are typically blamed on the country's rapid growth leading to corner-cutting by builders and the widespread flouting of safety rules.

At least 20 people were killed in 2016 when a series of crudely-constructed multi-storey buildings packed with migrant workers collapsed in the eastern city of Wenzhou.

Five people were killed on Thursday when the roof of a Shanghai commercial building caved in upon construction workers who were renovating it, the city government said.

The accident occurred at around 11:30 am (0330 GMT) in a central Shanghai neighbourhood, trapping around 20 people, according to fire rescue officials.

Official sources provided differing tallies of the numbers of people pulled out of the rubble throughout the day, but both the city government and the national emergency ministry now quote a death toll of five.

Authorities did not give details on the severity of the injuries suffered by survivors.

Police quickly sealed off the area with a huge security presence, preventing journalists from getting close.

The building had previously been used as a dealership for Mercedes-Benz cars, the fire rescue bureau said.

It was being redeveloped as a mixed-use arts and innovation site, according to Chinese media reports.

A local resident told AFP she was taking a nap when her bed suddenly began shaking, as if in an earthquake had struck. She then heard a loud bang.

"I thought it was an explosion at first," said the woman, who declined to give her name or to comment further.

Chinese media reports said the structure was around 3,000 square metres (32,000 square feet) in area. Aerial pictures on social media appeared to indicate that the roof of about half of the building collapsed.

Nine people were trapped after an automotive dealership building collapsed in Shanghai Thursday as it was undergoing renovation, but rescue personnel managed to pull 11 others to safety, Chinese authorities said.

The accident occurred around 11:30 am (0330 GMT) in an area of central Shanghai, the fire rescue bureau of China's Ministry of Emergency Management said on its verified social media account.

Pictures posted on the account showed bloodied and dust-covered construction workers being dug out of piles of rubble by emergency rescue personnel. 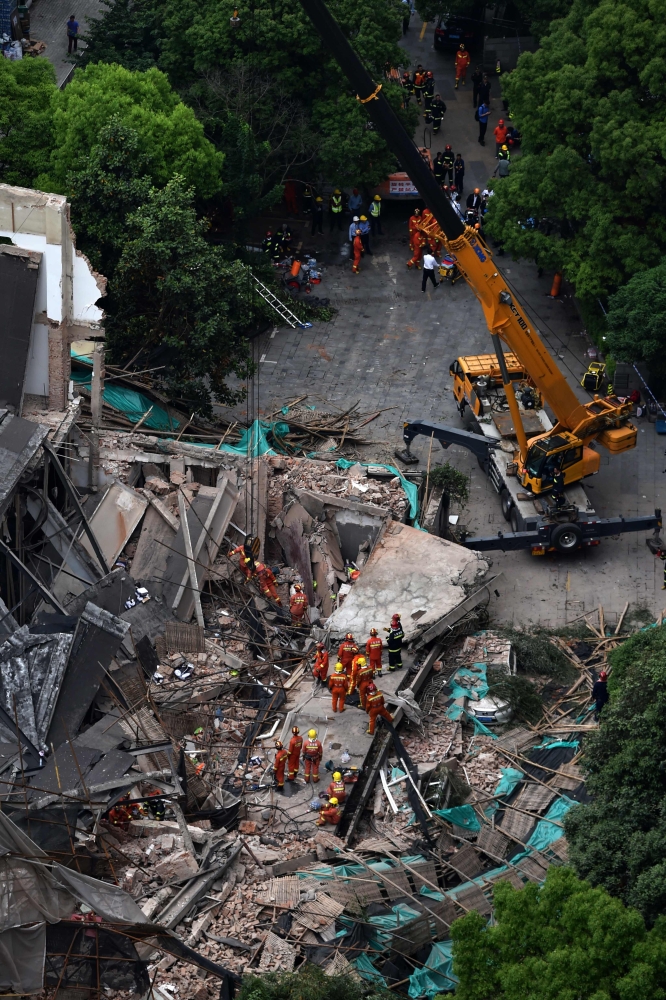 The low-rise building had been used as a dealership for Mercedes-Benz cars.

The bureau did not say whether anyone was killed or provide detail of any injuries to those who were rescued.