Tourists began fleeing cyclone-ravaged Fiji Monday and aid efforts intensified as the death toll climbed to 20, with officials warning it could rise further as reports trickle in from devastated remote communities.

"The images emerging from early aerial assessments of affected areas are truly heartbreaking, leaving little doubt about the ferocity of this cyclone," said the UN's Fiji coordinator Osnat Lubrani.

"It is clear from these catastrophic impacts that Fiji is facing a long road to recovery."

Winston, the strongest cyclone ever recorded in the Southern Hemisphere, razed scores of homes, crippled infrastructure and forced terrified residents to shelter in evacuation centres.

Photographs taken from a Royal New Zealand Air Force plane showed the devastation in remote villages that bore the brunt.

Many homes were reduced to piles of kindling, with roofing and furniture strewn about by winds that were strong enough to strip leaves and branches from trees.

In one image a lone man stands on the tin roof of his ruined home, apparently waving both arms at the military plane as it passes overhead.

The official body count went from six to 20 as communications were slowly restored to affected communities.

"(It) may rise further as police are still trying to get confirmation on some missing persons reports," said National Disaster Management Office director Akapusi Tuifagalele.

"Given the intensity of the storm and the images we have seen so far, there are strong concerns that the death toll won't stop climbing today and that hundreds of people will have seen their homes and livelihoods completely destroyed," she said. 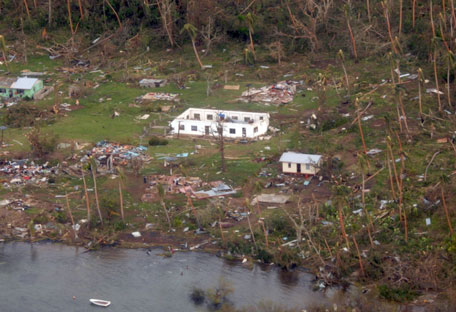 International tourists caught up in the disaster began to leave as flights resumed at Nadi airport after a two-day suspension.

Melbourne man Jeremy Bree told the Australian Broadcasting Corporation that he heard trees being ripped from the ground as he sat out the storm in a hotel on the main island Viti Levu.

"It was pretty amazing... the noise around was something I've never heard before, it was a real harrowing whine that came through," he said.

The airport's opening allowed aid efforts to be ramped up, with Australia announcing a Aus$5.0 million (US$3.6 million) package including basics such as food and drinking water.

Foreign Minister Julie Bishop said Canberra had also offered the use of a P-3 Orion aircraft and MRH-90 helicopters to reach outlying islands.

Care Australia disaster response coordinator Sarah Boxall said up to 6,000 people were still in evacuation centres and would need basics such as food, water and medical supplies.

"The next phase is the prevention of disease because once you get a lot of stagnant water around you get dengue (fever), which has been a problem in Fiji," she said.

The nation has declared a month-long state of natural disaster after a storm that Prime Minister Voreqe Bainimarama described as an "assault on Fiji".

Bainimarama, who has mobilised police and the military to help relief efforts, said he was determined to get Fiji back on its feet.

"There are Fijians out there who are without water, without a roof over their heads, without food and without essential services," he said.

"It is our duty to determine their needs and provide them with the support they need as soon as possible."

"Help is already on its way to the Lomaiviti (island) group, which was in the eye of the cyclone and suffered catastrophic impacts," she said.

"In one village on the island of Koro, every single house and community building has been destroyed."