Train mows down crowd at India festival, at least 60 dead

A speeding train ran over a crowd watching fireworks during a religious festival in northern India on Friday evening, killing at least 60 people and injuring dozens more, police said.

The train failed to stop after the accident on the outskirts of Amritsar, a city in Punjab state, said the state governing Congress party politician, Pratap Singh Bajwa. 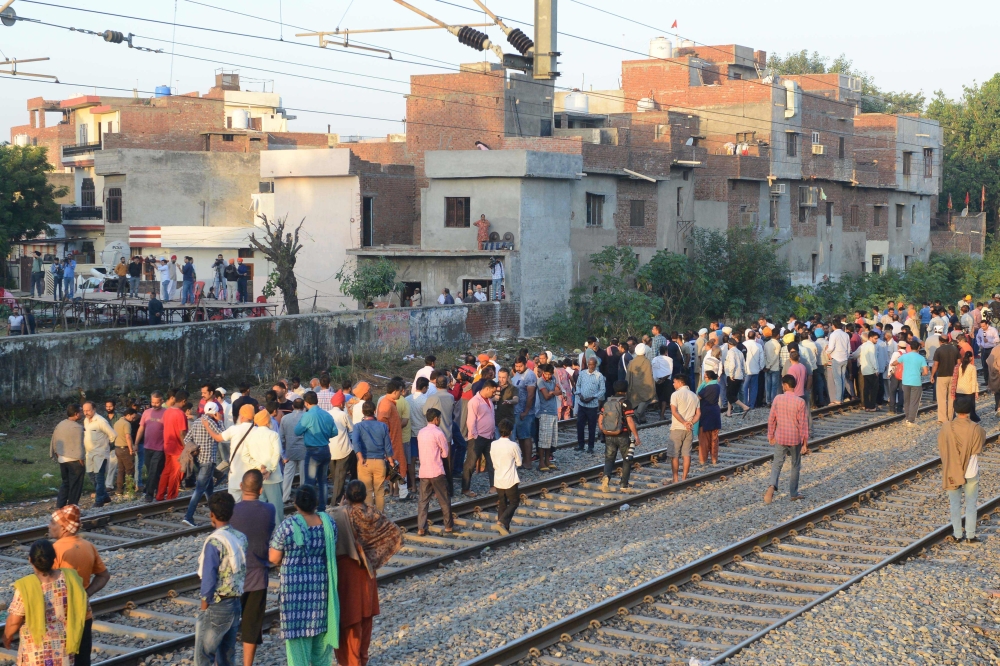 Railway police officer Sukhwinder Singh said Saturday morning that the death toll had risen to 60. Another 50 people have been injured and hospitalized.

The Press Trust of India news agency said two trains arrived from the opposite direction on separate tracks at the same time, giving little opportunity for people to escape. The casualties were caused by one of the trains, it quoted officials as saying.

Prime Minister Narendra Modi said he was extremely saddened by the accident. "Have asked officials to provide immediate assistance that is required," Modi said on Twitter.

A witness said the train didn't even sound its whistle as it sped past the site. As the fireworks started, a section of the crowd started retreating toward railroad tracks while observing the event.

"Why did authorities allow the fireworks display so close to the railroad track?'" he asked. He told the Republic television channel that he lost two brothers.

Another witness said the victims didn't realize that a train was coming because the fireworks were too loud.

Navjot Kaur Siddhu, a local Congress party politician who was the chief guest at the religious function, said the celebrations take place in the area every year and railroad authorities are alerted to run the trains at slow speeds.

A large number of people live in the area with homes on both sides of the railroad track, she said.

However, Junior Railways Minisfter Manoj Sinha said after visiting the accident site that organizers did not alert railroad authorities about their plan to hold the event there.

Shatrughan Das, an injured 35-year-old factory worker, said he was sitting close to the tracks watching the fireworks. "I didn't see the train coming. I fell unconscious. I saw the police taking me to a hospital as I regained consciousness."

"I am feeling a strong headache and pain in my back and legs," Das said from his hospital bed, adding his injuries were not serious.

Following the accident, people rushed to the site, nearly 465 kilometers (290 miles) north of New Delhi, and shouted at railway officials for not taking precautions.

At least 50 injured were admitted to a government-run hospital, PTI quoted Rajesh Sharma, a magistrate, as saying.

While accidents are relatively common on India's sprawling rail network, Friday's was among the deadliest in recent years. In 2016, 146 people were killed when a train slid off railroad tracks in eastern India.