Donald Trump snapped back Wednesday at the Danish prime minister's "nasty" dismissal of his attempts to purchase Greenland, heightening a row which had already prompted the US president to scrap a state visit.

Hours after announcing he would not visit Copenhagen next month as planned, Trump accused Prime Minister Mette Frederiksen of insulting the United States as a whole by rejecting talk of buying Greenland as "absurd."

With Frederiksen voicing her annoyance at Trump's cancellation, the war of words marks another spat between the US and one of its traditional allies since Trump came to power two years ago on an avowedly "America First" foreign policy platform.

Trump - who made his name as a New York property mogul -- has characterized his idea of buying Greenland as essentially "a large real estate" deal, arguing it is a burden on Denmark as the autonomous territory's economy depends heavily on subsidies from Copenhagen.

Speaking to reporters at the White House, Trump said he was not the first US president to have raised the idea of buying the vast Arctic island which has housed an American air base since even before it became formally a part of Denmark.

"It was not a nice statement the way she blew me off. We've done a lot for Denmark ... She said absurd. That's not the right word to use.

"It was not a nice way of doing it. She could have just said no, we'd rather not do it.

"She's not talking to me, she's talking to the United States of America."

The idea of the US buying Greenland was initially dismissed as a joke by some, but its strategic location has grown at a time when both Russia and China are flexing their muscles.

Greenland was a Danish colony until 1953, when it became part of the Danish Realm, and it gained "autonomous territory" status in 1979.

The government of Greenland has insisted that the island is "not for sale" and Frederiksen told reporters on Wednesday that she fully endorsed that view.

"I am both annoyed and surprised that the US president has cancelled a state visit," said the prime minister who had been preparing to host Trump early next month.

But, she added, "Denmark and the US are not in crisis, the US is one of our closest allies" and the invitation to visit was still open.

The postponement of Trump's visit - which was announced on Twitter - has sparked strong reactions in Denmark.

"Reality transcends imagination ... this man is unpredictable," said Morten Ostergaard of the Social Liberal Party, which is part of the ruling coalition.

"For no reason, Trump assumes that (an autonomous) part of our country is for sale. Then insultingly cancels visit that everybody was preparing for," tweeted Rasmus Jarlov, a member of the opposition Conservative Party.

"Are parts of the US for sale? Alaska? Please show more respect."

"Mette Frederiksen has been given the opportunity to emphasize that Greenland's big affairs are in fact decided in Copenhagen ... strengthening Denmark's position in this great strategic game at stake over the Arctic," it said.

The territory is home to the US airbase Thule, crucial during the Cold War as a first line of monitoring against a potential Russian attack.

But the melting polar ice sheet is opening up potentially major shipping routes, and untapped reserved of oil, gas and minerals will become increasingly accessible, leading Russia and China to show mounting interest in the region.

As far back as 1867, the US State Department expressed interest in the island. And in 1946, President Harry S. Truman offered $100 million in gold, or parts of Alaska, in exchange for Greenland.

President Donald Trump announced Tuesday that he was postponing a planned meeting with Denmark's prime minister because she does not want to sell Greenland to the United States.

Trump's decision confirms just how interested he was in purchasing Greenland, an idea that had initially been dismissed as a joke by some, but which the White House later insisted had a serious purpose because of the territory's strategic location.

"Based on Prime Minister Mette Frederiksen's comments, that she would have no interest in discussing the purchase of Greenland, I will be postponing our meeting scheduled in two weeks for another time," Trump tweeted.

A White House spokesman confirmed that "the visit to Denmark is canceled."

"The Prime Minister was able to save a great deal of expense and effort for both the United States and Denmark by being so direct. I thank her for that and look forward to rescheduling sometime in the future!" the US president wrote.

The Wall Street Journal first reported that Trump had expressed interest in the self-governing part of Denmark - which is mostly covered in ice - asking advisors if it would be possible for the US to acquire the territory.

The president, a former real estate magnate, has been curious about the area's natural resources and geopolitical relevance, the paper said.

Trump confirmed Sunday that he was indeed interested in buying Greenland, but said it was not a priority for his administration, and that the Denmark trip was "not for this reason at all."

No Trump hotel for Greenland, US president promises

US President Donald Trump jokingly promised on Monday that he would not build one of his eponymous hotels in Greenland, the day after he confirmed his interest in buying the Danish territory.

"I promise not to do this to Greenland!" he wrote.

The meme first appeared on Twitter Thursday with the caption: "Greenland in 10 years."

It was shared after The Wall Street Journal reported the president's interest in buying the island.

On Sunday, Trump confirmed his interest in doing so but said it was not a priority for his administration.

"Strategically it's interesting and we'd be interested, but we'll talk to (Denmark) a little bit," he told reporters, adding that he viewed it as a "large real estate deal."

Denmark colonized the 772,000 square-mile (two-million square kilometer) island in the 18th century. It is home to only about 57,000 people, most of whom belong to the indigenous Inuit community. 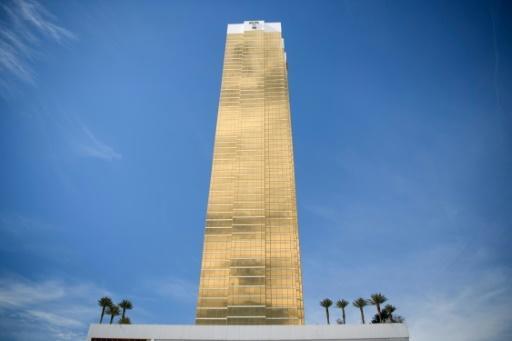 Greenland's ministry of foreign affairs insisted Friday the resource-rich island was ready to talk business, but was not for sale.

US President Donald Trump on Sunday confirmed his interest in buying Greenland, but said it was not a priority for his administration. 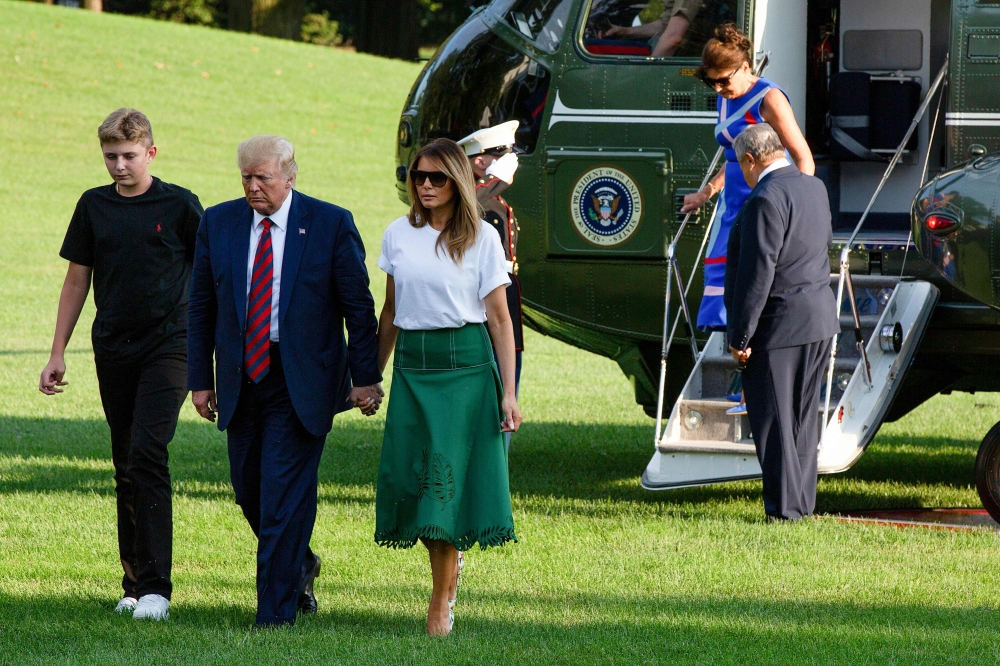 "It's something we talked about," Trump told reporters.

"The concept came up and I said certainly, strategically it's interesting and we'd be interested, but we'll talk to (Denmark) a little bit," he said, stressing that it was "not number one on the burner" for the government.

The Wall Street Journal reported Thursday that Trump had expressed interest in the self-governing part of Denmark - which is mostly covered in ice - asking advisors if it would be possible for the US to acquire the territory. 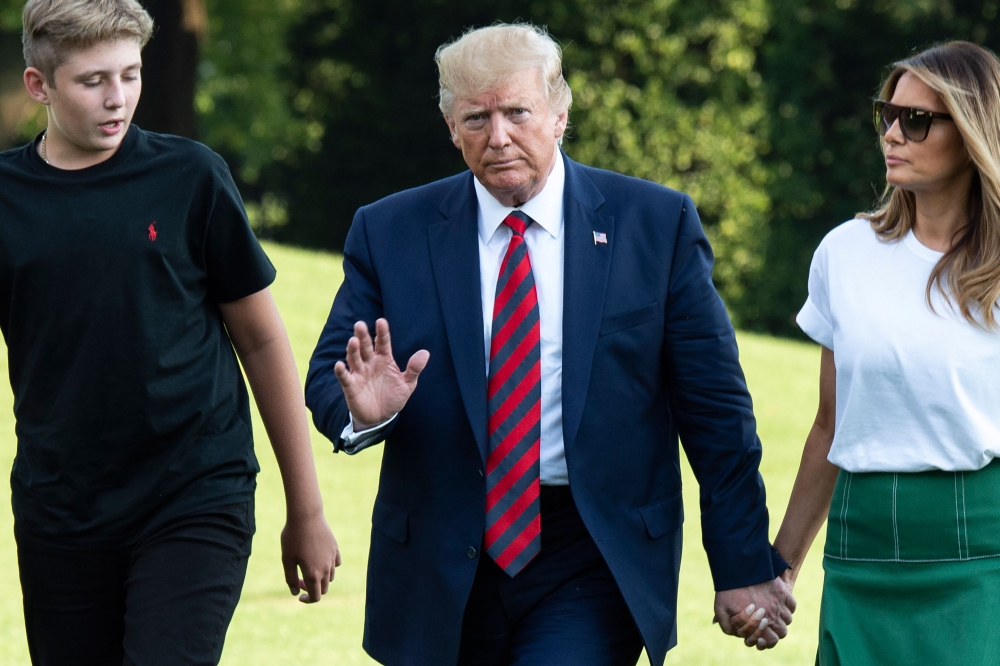 The president, a former real estate magnate, has been curious about the area's natural resources and geopolitical relevance, the paper said.

When asked if he would consider trading a US territory for Greenland, Trump replied that "a lot of things could be done."

"Essentially, it's a large real estate deal," he said.

"It's hurting Denmark very badly because they're losing almost $700 million a year carrying it... and strategically, for the United States, it would be nice," he added.

Denmark colonized the 772,000 square-mile (two-million square kilometer) island in the 18th century. It is home to only about 57,000 people, most of whom belong to the indigenous Inuit community.

Greenland's ministry of foreign affairs insisted Friday the island was ready to talk business, but was not for sale.

"#Greenland is rich in valuable resources such as minerals, the purest water and ice, fish stocks, seafood, renewable energy and is a new frontier for adventure tourism," it tweeted.

"We're open for business, not for sale," it added.