The mercury has been gradually climbing the past 24 hours, with another slight rise in temperatures forecasted for the UAE on Thursday.

However, if you are in Ras Al Khaimah mountains, the lowest average is still around five degrees Celsius, with the recent rainfall in the area cooling down the surroundings.

While the average temperatures in the coast and internal areas  are expected to hover in the mid-twenties at its highest, the late evening will also see humidity levels creep northwards, giving rise to early morning fog over those parts on Friday.

The partly cloudy skies will provide some relief, with light to moderate winds bringing in some fresh air.

The sea is expected to be slight to moderate.

The skies will be partly cloudy in general and cloudy at times over some areas in the UAE on Tuesday, according to the National Centre of Meteorology and Seismology (NCMS).

Meanwhile, the coming 48 hours will witness a spike in humidity levels, giving rise to inland fog and mist on Tuesday and Wednesday, before cloud cover could give way to further rainfall on the latter day.

The winds will be moderate in general and freshening at times, especially over the sea.

Relative humidity will increase during the night and early in the morning over the interior and the coastal areas, with a chance of fog forming over some areas, especially in the interiors.

Even as the UAE wipes down its rain boots following Sunday’s deluge, it may be premature to put away those umbrellas just yet.

The country’s National Centre for Meteorology and Seismology (NCMS) has forecasted more rain on the horizon with light showers.

The soaring temperatures that have been hovering close to 30 degrees Celsius this past week, including yesterday’s highest recorded as 27.2°C in Fujairah Port, will finally dip to bring cooling climes to the UAE.

However, the NCMS has warned residents and motorists of increasing fresh to strong winds over the country on Monday, which could give rise to dust and sand over open areas and hinder horizontal visibility.

Revellers and anglers heading out to sea today are also being warned with ‘very rough’ weather ahead in the Arabian Gulf and the Oman Sea.

Residents of Abu Dhabi city woke up in the early hours of the morning to overcast skies before it started to pour down amidst forecast that rain in the UAE and other Gulf countries would continue through the day and tomorrow.

Heavy rain lashed the neat streets of the capital of around 1.5 million people early this morning and it continued in the following hours.

Big lines of cars were seen in some streets while fire engines and ambulances were heard unleashing their sirens in some parts of the city.

Witnesses said some minor accidents occurred on the city’s slippery roads to low visibility caused by the heavy downpour.

The National Center of Meteorology and Seismology (NCMS) has recommended some measures for safe behaviour, given that the rain is expected to continue today and tomorrow.

Accord to a report in Emarat Al Youm, the sea is forecast to be severely agitated. The NCMS has called on fishermen and sea-goers to take all precautions during the thunderstorm activity.

The NCMS also advised the public to be extra cautious while driving and to keep away from valleys and rainwater catchments.

The lowest temperature recorded in the country this morning was 10.7°C on the Jess mountain at 7.15 am.

By 9am, Ras Al Khaimah also reported downpours, as the wet weather spread across the UAE.

Showers were also reported by the National Center for Meteorology and Seismology (NCMS) in Sharjah at 8am.

Dubai residents woke up to a rainy Sunday morning with rain in Jebel Ali on Saturday night spreading out across the emirate.

An E24|7 reader reported that it was drizzling at 6am on Sheikh Zayed Road. Another reader, called in to say a proper early morning shower was underway in Jebel Ali.

A steady shower was also reported from Jumeirah Lakes Towers (JLT) at 7am. 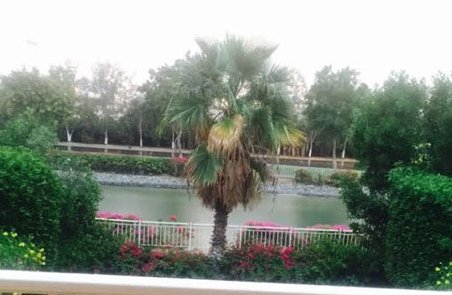 Rain in JLT this morning. (Supplied)

Another tweet read: “Scattered rain over Liwa and some areas of Abu Dhabi.” On Saturday, the weather department warned about rain associated with fresh to strong winds. The sea was forecast to be rough to very rough.