When, where and how to watch natural fireworks in Dubai - and online

If you happen to miss the amazing Burj Khalifa fireworks display on New Year’s Eve, you can start 2013 off right with another light show – the Quadrantid meteor shower.

The annual Quadrantid meteor shower throws up about 40 meteors per hour, usually on January 3 and 4, but it may be visible from January 1 up until January 5.

Which means that Quadrantids are zipping overhead as you read this – have been doing so since Tuesday, actually, and will do so until Sunday – but the peak of the shower is expected very early on Thursday, just before dawn.

According to US space agency Nasa, the Quadrantids is a little-known meteor shower named after an extinct constellation, and will present an excellent chance for hardy souls to start the year off with some late-night meteor watching.

In Dubai and the rest of the UAE, they are expected to peak in the wee morning hours of January 3. This shower can be as spectacular as the Perseids or the Geminids, but the Quadrantids’ peak intensity will be short – just a few hours, unlike the Geminids in December, which peaked for a couple of days.

According to the Dubai Astronomy Group (DAG), the highest rate of Quadrantids meteors per hour was witnessed in 1932 (80 per hour). In addition, the DAG advises that the best time for observations is a dark place after midnight. It is best to trek out to an area away from bright lights in the wee hours of January 4.

For us in Dubai, the shower peaks on Thursday, January 3, 2013. This event occurs when earth passes through a narrow stream of debris from a comet thought to have broken apart some 500 years ago.

The shower is expected to be strong but elusive, with a peak that lasts no longer than a couple of hours.  The shower’s radiant near Polaris favors observers in the northern hemisphere.

Meteors radiate from the constellation Bootes, close to the North Star. Unfortunately, light from a waning gibbous moon will wash out many Quadrantids, cutting down on the number of meteors seen by skywatchers.

Since we are in the Northern Hemisphere, we should consider ourselves privileged inasmuch that we’ll get a much better view of the Quadrantids than our peers in the Sothern Hemisphere, who might have to contend with Nasa’s live streaming of the celestial show.

The source of this meteor shower was unknown until December 2003 when Peter Jenniskens of the Ames Research Center (Nasa) found evidence that meteoroids come from 2003 EH1 , an ‘asteroid’, which is probably a piece of a comet which collapsed 500 years ago.

“Unlike the more famous Perseid and Geminid meteor showers, the Quadrantids only last a few hours, so it’s the morning of January 3 or nothing,” says Nasa.

Like the Geminids, the Quadrantids originate from an asteroid, called 2003 EH1. Dynamical studies suggest that this body could very well be a piece of a comet which broke apart several centuries ago, and that the meteors you will see before dawn on January 3 are the small debris from this fragmentation.

After hundreds of years orbiting the sun, they will enter our atmosphere at 90,000 mph, burning up 50 miles above Earth's surface – a fiery end to a long journey! 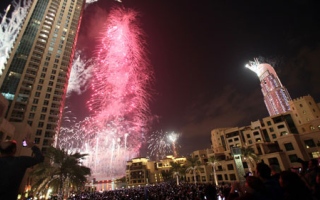 Goodbye 2012: Dubai at stroke of midnight