Cities and monuments switch off for Earth Hour

The Empire State Building and United Nations headquarters in New York joined other iconic buildings and monuments around the world plunging into darkness for sixty minutes on Saturday to mark Earth Hour and draw attention to climate change.

The Eiffel Tower, the Kremlin, the Acropolis in Athens and Sydney's Opera House also dimmed their lights as millions of people from some 170 countries and territories were expected to take part in Earth Hour, the annual bid to highlight global warming caused by the burning of coal, oil and gas to drive cars and power plants.

The event, which originated in Sydney, has grown to become a worldwide environmental campaign, celebrated across all continents.

The World Wild Fund for Nature (WWF) conservation group, which organizes the event, said great strides had been made in highlighting the dire state of the planet.

"We started Earth Hour in 2007 to show leaders that climate change was an issue people cared about," coordinator Siddarth Das said.

"For that symbolic moment to turn into the global movement it is today, is really humbling and speaks volumes about the powerful role of people in issues that affect their lives."

In Sydney, many harborside buildings switched off their lights for an hour from 8:30 pm local time as the call for action began rolling out across the world.

"I think people probably avoid the fact that climate change is happening, so it's good to see the city grouping together to support Earth Hour."

From Australia, it moved westward through Asia, with many of the skyscrapers ringing Hong Kong's Victoria Harbour going dark in solidarity, while at Myanmar's most sacred pagoda, the Shwedagon, 10,000 oil lamps were lit to shine a light on climate action.

The lights of the Eiffel Tower in Paris, France's best-known symbol, were switched off for five minutes at 1930 GMT and the Burj Khalifa tower in Dubai, the world's tallest building, went dark for an hour.

London's Big Ben, the Houses of Parliament and London Eye giant wheel followed suit, among 270 British landmarks that switched off.

Berlin's famed Brandenburg Gate and its City Hall also plunged into darkness as some 300 other German cities took part in the event.

In Singapore, around 200 organizations, including buildings along the city-state's iconic skyline, went black to mark the occasion.

Organizers said around 35,000 people watched performances and participated in a "carbon-neutral run" that saw some runners in panda and tiger costumes to raise awareness of wildlife protection.

And in Japan, Tokyo's famed Sony Building in Ginza extinguished its bright lights to honor the occasion.

Homes and businesses were also asked to join, and individuals could commit to the cause on Facebook.

WWF said teams around the world would use Earth Hour this year to highlight climate issues most relevant to individual countries.

In South Africa, the focus was on renewable energy, while in China, WWF said it was working with businesses to encourage a shift toward more sustainable lifestyles.

Last year, scientists recorded the Earth's hottest temperatures in modern times for the third year in a row. 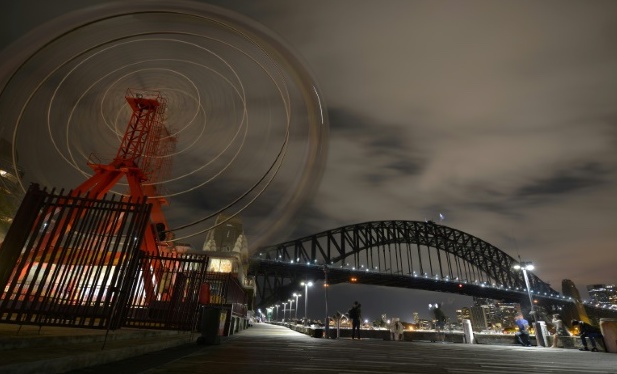 That is the level at which many scientists say humankind can still avoid worst-case climate outcomes in terms of rising sea levels, worsening droughts and floods, and increasingly violent superstorms.

"Climate change is visible proof that our actions can have a ripple effect beyond physical borders," Das said.

"It is up to each of us to ensure the impact we create helps instead to improve the lives of those around us and elsewhere, at present and in the future."

Earth Hour does not collect global statistics about the energy conserved during the 60-minute blackout, chiefly a symbolic event.