Two families were killed in the same house in Sicily when the torrential rains and high winds lashing Italy caused a river to burst its banks, drowning the nine people inside.

Rushing water filled the villa in Casteldaccia in the province of Palermo in moments, wiping out the families who were spending Saturday night there.

A father and his daughter escaped harm because they had left the house to do some shopping while a third person climbed a tree to survive. 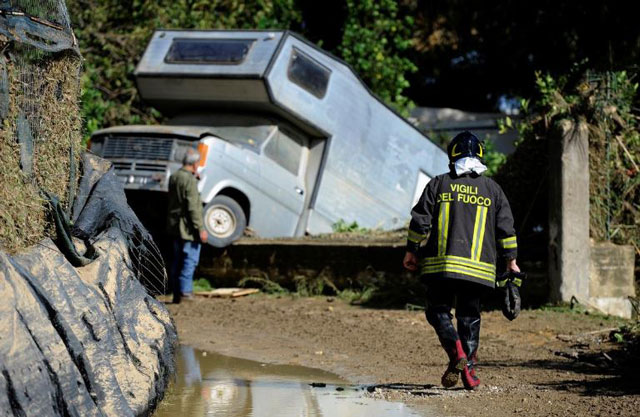 The tragedy brings the number of people killed in Sicily this weekend to at least 12 after three other people died in their cars when hit by torrents of water.

Italian Prime Minister Giuseppe Conte spoke of “an immense tragedy” during a visit on Sunday to affected areas in Sicily.

He said a cabinet meeting would be convened this week to declare a state of emergency and come up with the first package of aid for areas affected.

Heavy rains and gale-force winds have battered Italy for several days, uprooting millions of trees and cutting off villages and roads.

Italy’s Civil Protection Agency said deaths caused by the wave of bad weather stood at 17, excluding the fatalities in Sicily.

Some of the worst damage has been recorded in the northern regions of Trentino and Veneto.

On Saturday the governor of Veneto, Luca Zaia, said storm damage in the region amounted to at least a billion euros.

During a visit on Sunday to badly-hit areas in the north, Italy’s Interior Minister Matteo Salvini said 250 million euros ($285 million) had already been earmarked for relief.

He said the government would be asking to use special EU funds.

Salvini, who is also deputy prime minister, said a rough estimate of how much it would cost to safeguard Italy against such events was 40 billion euros.

A German tourist died on Friday when hit by lightning on the island of Sardinia while another person struck by lightning several days ago died in hospital, Italy’s Civil Protection Agency said on Saturday.

A spokeswoman said 17 deaths related to the severe weather had been reported to the Agency so far.

Many of the victims to date have been killed by falling trees.

Coldiretti, the association of Italian agricultural companies, said in a statement that gales had destroyed around 14 million trees, many in the far north.

Areas from the far northeast to Sicily in the southwest have been affected by the storms, with the worst damage in the northern regions of Trentino and Veneto - the region around Venice - where villages and roads have been cut off by landslides.

In the Alps near Belluno, 100 km (60 miles) north of Venice, pine trees and red spruces were snapped wholesale like matchsticks.

The surface of the Comelico Superiore dam, farther north near the Austrian border, was covered with the trunks of trees that had fallen into the Piave river.

“We’ll need at least a century to return to normality,” Coldiretti said.

Many of the squares and walkways of Venice itself have been submerged in the highest floods the canal city has seen in a decade.

The governor of Veneto, Luca Zaia, said the region’s storm damage amounted to at least a billion euros ($1.1 billion).

Heavy rain and gales devastating parts of Italy have claimed two more lives, taking the overall death toll to at least 17, and laid waste to vast swathes of forest.

Angelo Borrelli, head of the Civil Protection agency, said Veneto had seen winds of up to 180 kph (112 mph), and that the situation there was “apocalyptic”.