President Donald Trump on Monday met with victims of Hurricane Michael in devastated areas of Florida and Georgia but again cast doubt on the scientific consensus that climate change is caused by human activity.

Flying in the Marine One presidential helicopter over Florida's Mexico Beach, one of the towns worst hit by the Category 4 storm, Trump surveyed uprooted trees and rows of roofless homes, some of them torn from their foundations.

"It is incredible, the power of the storm," Trump said in televised remarks after witnessing downed water towers and a parking lot where 18-wheel trucks had been scattered like children's toys.

"Somebody said it was like a very wide, extremely wide tornado. That's really what this was," he said. "This was beyond any winds that they've seen." 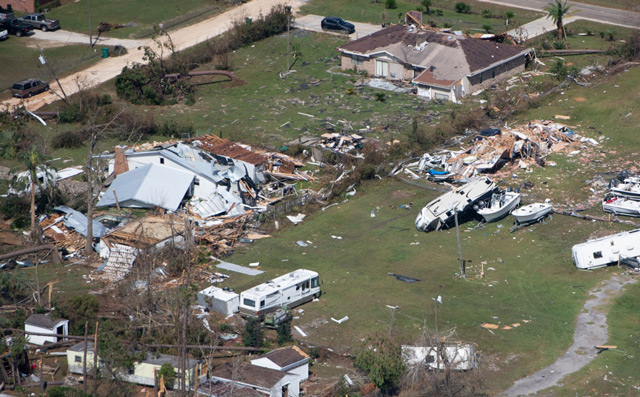 Michael smashed into Florida's western coast last Wednesday, packing winds of 155 miles (250 kilometers) an hour as it began a northern march through several states, killing at least 18 people, according to US media reports.

Trump was accompanied by his wife Melania , Florida's outgoing Republican governor Rick Scott and Kirstjen Nielsen, head of the Department of Homeland Security, as he inspected damaged homes and businesses. 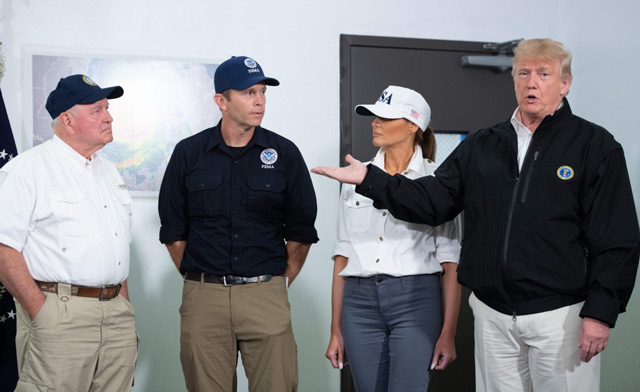 The president praised Scott, who is running for the Senate in next month's tense midterm elections, for "doing an incredible job."

The governor thanked Trump for federal aid, saying that everything the state asked for had been delivered.

Powerful Hurricane Michael slammed into the Florida Panhandle with terrifying winds of 155 mph Wednesday, splintering homes and submerging neighborhoods before continuing its destructive march inland across the Southeast.

It was the most powerful hurricane to hit the continental U.S. in nearly 50 years and at least one death was reported during its passage.

Supercharged by abnormally warm waters of the Gulf of Mexico, the Category 4 storm crashed ashore in the early afternoon near Mexico Beach, a tourist town about midway along the Panhandle, a 200-mile (320-kilometer) stretch of white-sand beach resorts, fishing towns and military bases. After it ravaged the Panhandle, Michael entered south Georgia as a Category 3 hurricane - the most powerful in recorded history for that part of the neighboring state.

In north Florida, Michael battered the shoreline with sideways rain, powerful gusts and crashing waves, swamping streets and docks, flattening trees, stripped away leaves, shredding awnings and peeling away shingles. It also set off transformer explosions and knocked out power to more than 388,000 homes and businesses.

First fatality reported
A Panhandle man was killed by a tree toppling on a home, Gadsden County Sheriff's Office spokeswoman Anglie Hightower said. She said authorities got a call Wednesday evening that the man was trapped but rescue crews were hampered by downed trees and debris blocking roadways. Authorities haven't yet confirmed the man's name.

Damage in Panama City was extensive, with broken and uprooted trees and power lines down nearly everywhere. Roofs were peeled off and homes split open by fallen trees. Twisted street signs lay on the ground. Residents emerged in the early evening to assess damage when rains stopped, though skies were still overcast and windy.

Vance Beu, 29, was satying with his mother at her apartment, Spring Gate Apartments, a small complex of single-story wood frame apartment buildings. A pine tree punched a hole in their roof and he said the roar of the storm sounded like a jet engine as the winds accelerated. Their ears even popped as the barometric pressure dropped.

"It was terrifying, honestly. There was a lot of noise. We thought the windows were going to break at any time. We had the inside windows kind of barricaded in with mattresses," Beu said.

Kaylee O'Brien was crying as she sorted through the remains of the apartment she shared with three roommates at Whispering Pines apartments, where the smell of broken pine trees was thick in the air. Four pine trees had crashed through the roof of her apartment, nearly hitting two people. She was missing her 1-year-old Siamese cat, Molly.

"We haven't seen her since the tree hit the den. She's my baby," O'Brien said, her face wet with tears.
In Apalachicola, Sally Crown rode out the storm in her house. The worst damage   she thought   was in her yard. Multiple trees were down. But after the storm passed, she drove to check on the cafe she manages and saw the scope of the destruction.

"It's absolutely horrendous. Catastrophic," Crown said. "There's flooding. Boats on the highway. A house on the highway. Houses that have been there forever are just shattered."

Gov. Rick Scott announced soon after the powerful eye had swept inland that "aggressive" search and rescue efforts were just beginning and urged people to stay off debris-littered roads.
"If you and your family made it through the storm safely, the worst thing you could do now is act foolishly," he said.
With the hurricane still pounding the state hours after it came ashore, and conditions too dangerous in places for search-and-rescue teams to go out, there were no further reports on deaths or injuries by nightfall.

Michael was a meteorological brute that sprang quickly from a weekend tropical depression, going from a Category 2 on Tuesday to a Category 4 by the time it came ashore. It was the most powerful hurricane on record to hit the Panhandle.

More than 375,000 people up and down the Gulf Coast were urged to evacuate as Michael closed in. But the fast-moving, fast-strengthening storm didn't give people much time to prepare, and emergency authorities lamented that many ignored the warnings and seemed to think they could ride it out.

Diane Farris, 57, and her son walked to a high school-turned-shelter near their home in Panama City to find about 1,100 people crammed into a space meant for about half as many. Neither she nor her son had any way to communicate because their lone cellphone got wet and quit working.

"I'm worried about my daughter and grandbaby. I don't know where they are. You know, that's hard," she said, choking back tears.

Hurricane-force winds extended up to 45 miles (75 kilometers) from Michael's center at the height of the storm. Forecasters said rainfall could reach up to a foot (30 centimeters) in spots. And then there was the life-threatening storm surge to deal with.

A water-level station in Apalachicola, close to where Michael came ashore, reported a surge of nearly 8 feet (2.5 meters).

Based on its internal barometric pressure, Michael was the third most powerful hurricane to hit the U.S.
mainland, behind the unnamed Labor Day storm of 1935 and Camille in 1969. Based on wind speed, it was the fourth-strongest, behind the Labor Day storm (184 mph, or 296 kph), Camille and Andrew in 1992.

It appeared to be so powerful that it remained a hurricane as it moved into south Georgia early Thursday. Forecasters said it would unleash damaging wind and rain all the way into the Carolinas, which are still recovering from Hurricane Florence's epic flooding.

At the White House, President Donald Trump said, "God bless everyone because it's going to be a rough one," he said. "A very dangerous one." His office said he would tour the devastated areas next week.

In Mexico Beach, population 1,000, the storm shattered homes, leaving floating piles of lumber. The lead-gray water was so high that roofs were about all that could be seen of many homes.

In Panama City, plywood and metal flew off the front of a Holiday Inn Express. Part of the awning fell and shattered the glass front door of the hotel, and the rest of the awning wound up on vehicles parked below it.
"Oh my God, what are we seeing?" said evacuee Rachel Franklin, her mouth hanging open.

The hotel swimming pool had whitecaps.

"We are in new territory," National Hurricane Center Meteorologist Dennis Feltgen wrote on Facebook. "The historical record, going back to 1851, finds no Category 4 hurricane ever hitting the Florida panhandle."
The storm is likely to fire up the debate over global warming.

Scientists say global warming is responsible for more intense and more frequent extreme weather, such as storms, droughts, floods and fires. But without extensive study, they cannot directly link a single weather event to the changing climate.

With Election Day less than a month away, the crisis was seen as a test of leadership for Scott, a Republican running for the Senate, and Tallahassee Mayor Andrew Gillum , the Democratic nominee for governor. Just as Northern politicians are judged on how they handle snowstorms, their Southern counterparts are watched closely for how they deal with hurricanes.

Only a skeleton staff remained at Tyndall Air Force Base, situated on a peninsula just south of Panama City. Hundreds of military families were moved out, and the base's aircraft, which include F-22 Raptors, were flown to safety hundreds of miles away.

In St. Marks, John Hargan and his family gathered up their pets and moved to a raised building constructed to withstand a Category 5 after water from the St. Marks River began surrounding their home.