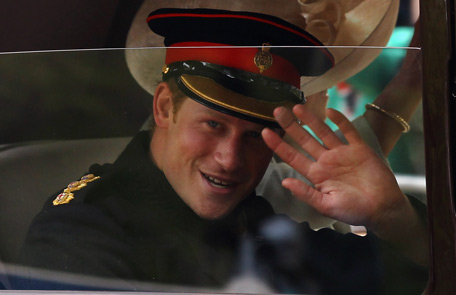 If you take a closer look at official wedding photographs, at the lovely little Eliza Lopes, the Duchess of Cornwall's grand-daughter, you will see what appears to be an uninvited guest in the line-up.

Clutched in the adorable three-year-old's hand is something pink and furry, reveals Daily Mail. But what on earth is it?

A giggling Camilla let slip the secret to the paper saying "it was a £1 wiggly worm bought by joker Prince Harry especially for the occasion".

Speaking at charity event in Wiltshire, the Duchess told the Mail that she had been 'terribly worried' that Eliza and the other young bridesmaids might find the event a bit overwhelming.

Daily Mail wrote: "So in order to break the ice and keep the youngsters occupied, Harry brought along the cheap furry toy which wriggles when you pull a piece of string."

When Eliza, whose mother is Camilla's daughter, Laura Lopes, looked a bit scared at the roar of the crowd on the carriage ride from Westminster Abbey back to Buckingham Palace, best man Harry quickly pulled it out of his pocket to make the youngster laugh, says the paper.

If a giant asteroid heading towards Earth did hit the planet, it would have the force of more than 65,000 atomic bombs, blasting a crater six miles wide and 2,000ft deep.

The good news is that it will just miss us in November, Nasa experts predicted last night, reports The Sun.

The space rock is 1,300ft wide and weighs 55million tons - the largest object ever to approach our planet so close, NASA revealed to the paper.

It will pass at a distance of 201,700 miles - described by an astronomer as "a cosmic hair's breadth".

That is closer than the Moon, which orbits 238,857 miles away on average, the daily said.

The asteroid orbits the sun every 14 years. But experts are confident it will not collide with us within 100 years, assures the daily.

YU55 will be visible with small telescopes around November 8. 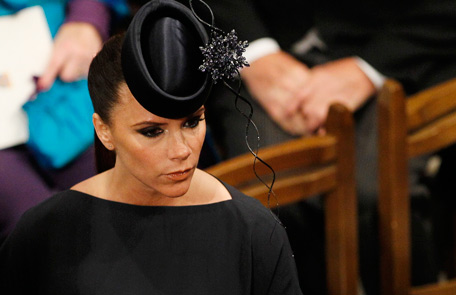 Pregnant Victoria Beckham went on a Harrods shopping spree where she spent £10,000 on nursery items for her yet to be born baby girl.

Victoria, 37, and husband DAVID, 36, have picked out a pink colour scheme for their Beckingham Palace creche and bought a luxury changing table and cot, reveals The Sun.

Posh, who is due to give birth in the summer, has also spent £10,000 doing up a nursery at their luxurious French villa in Bargemon, the paper said.

After the birth the couple plan to have a late holiday before a permanent return home to Sawbridgeworth, Herts.

The couple already have three children - Brooklyn, Romeo and Cruz.

MOSCOW: A terrifying mid-air mishap has been caught on camera and has spread like wildfire on the social networking sites.

Videos posted on YouTube by witnesses show a plane lurching wildly out of control in the skies close to Moscow.

The Tupolev plane, used by defence forces, is seen twisting from side to side uncontrollably before pilots manage to land it safely at a military aerodrome outside Moscow.

Luckily no passengers were onboard at the time, and Russian military prosecutors have launched an investigation into the incident.

"The military prosecutors have launched a probe which should establish the reasons for the mid-air incident that almost led to an aviation disaster,'' a spokesman for the chief military prosecutor's office told the RIA Novosti news agency.

The spokesman for the chief military prosecutor's office told RIA Novosti that the plane's steering system had malfunctioned and praised the pilots for managing to land safely in a built-up area.

"During a test flight, the steering system broke down on the TU-154B-2 plane belonging to the Defence Ministry's 800th air base,'' the spokesman said.

"Thanks to the great professionalism and supreme skill of the pilots, the crew managed to land on the second attempt at Chkalovsk aerodrome, avoiding casualties among the airforce and the local population.''

The video posted on April 30, which has been watched more than 380,000 times, says that the plane was being flown for the first time after a 10-year break.

The ageing Tupolev 154 planes, first flown in 1968 and used by Aeroflot until 2009, have been involved in a number of air accidents in recent years.

The aircraft's last major fatal crash was on April last year, when a Tu-154 carrying Polish president Lech Kaczynski and other top officials came down in fog near the Russian city of Smolensk.

In September a Tu-154 plane made a miraculous emergency landing on a derelict airstrip in the remote Komi region after its electrical systems failed midflight.

This year, the spectacular display of Russian military aviation that usually accompanies the Victory Day parade on Red Square on May 9 has been cancelled, according to media reports, in an apparent cost-cutting measure.