Best of Web: William and Kate at the zoo

BRAZIL: A Brazilian zoo Friday signed off on their two new Bengal tigers and in a nod to their regal bearing named them William and Kate in honor of the royal wedding in England.

The big cats, a four-year-old male and five-year-old female, were acquired in a deal with an amusement park and are expected to arrive at the Rio zoo on Monday.

Authorities at the institution will be hoping the pair mate when they arrive at their new home, according to local press.

Rio's zoo, which at 66 years is the country's oldest, sprawls over an area of 138,000 square meters and houses over 2,000 reptiles, mammals and assorted birds.

Meanwhile, half a world away, Prince William and Kate Middleton were married at London's Westminster Abbey watched by some two billion viewers around the world.

Bunny gets tiny cart to cruise in

US: After discovering a teeny tiny baby rabbit abandoned by its mum in their garden, an American family realised it was paraplegic and set about crafting it an appropriately small cart-type contraption to help it get around. Cue copious quantities of cuteness.

Joe the Easter Bunny, as he was soon named, was found curled up alongside his sibling by the the O'Rourke family in Tucson, Arizona.

Clocking that the little fella didn't have the use of his hind legs and would therefore struggle to get on in the wild, the family decided to take action.

While looking after the rabbits, son Liam got to designing an ATB (All Terrain Bunny) support system, a delightful red and yellow wagon to be strapped onto the rabbit's rear.

With the help of his dad, a sketch of the contraption became a reality and Joe set about getting used to his new wheels.

'You should just put a Superman cape on him so it looks like he's flying all the time,' said another viewer (who is now officially our hero).

'Such an brave lil bunny, I don't give a s**t if he is paraplegic or not I would still adopt him,' was the response of MrGodOfWarful, while BeaKerXD posted simply: 'CUTEST BUNNY EVER'.

Some viewers questioned the efficacy of Joe's wagon, however, with Smudge4C musing: 'This is cute and all, but this doesn't seem to be doing anything but impinging on mobility.

'He was getting around just fine before. Where can his wheels take him that he couldn't go by dragging his back legs behind him like he was doing before?

'If anything, this is preventing him from overcoming certain obstacles because there's a large, cumbersome appendage behind him.

'I'm concerned that you have not helped this rabbit at all and are, in fact, hindering him!'

TheAntiPixel then weighed in with this response: 'That is a very good point, but also if he dragged his legs everywhere he could rub them raw which can then cause an infection which could make him VERY sick or even kill him.

'You don't want a sick bunny now do you?'

Once Joe and his sibling were back on their feet, so to speak, the O'Rourkes took them to a wildlife rescue centre.

Chelsea manager Carlo Ancelotti believes his team's push towards the defence of their Premier League title has been powered by the sun.

"I don't want to joke, but when the sun comes out and the temperature is hotter, for us it's better. We suffer in the winter temperatures," said Ancelotti after Saturday's 2-1 win over Tottenham at Stamford Bridge.

"It could be a good reason to explain this. Last year, this moment was very good for us. Good home form."

Chelsea are three points behind leaders Manchester United who have a game in hand and will face Arsenal on Sunday.

Is 26 minutes the ideal length of a nap?

US: Air traffic controllers in the US have been advised to take 26-minute naps, after a string of incidents involving workers falling asleep. So is 26 minutes the ideal length of time for a nap?

Five cases of air traffic controllers falling asleep on the job have been revealed since March.

In three of those cases, disclosed by the Federal Aviation Association, workers have been fired.

Now the National Transportation Safety Board (NTSB) is calling for "controlled naps" to be built into night shifts.

Referring to a 1995 study from Nasa, which he co-authored, NTSB member and fatigue expert Mark Rosekind said that a 26-minute nap would improve performance by 34% and alertness by 54%.

His call for work naps is supported by the controllers' union, which wants naps to be allowed in both overnight and day shifts.

Beyond the aviation industry, combating fatigue is an issue that affects many people across all professions, working day and night, although it carries obvious risks in jobs that involve motoring or machinery.

But other experts are doubtful that 26 minutes is the optimum napping time.

It's a bit too long and risks you falling into a deep sleep, says Jim Horne, director of the Sleep Research Council in the UK, which advises the government on guidelines for drivers.

"What we recommend is that a nap is combined with a cup of coffee so you have some caffeine, and that takes about 20 minutes to kick in.

"Have a cup of coffee and get your head down. Done together it has a more powerful effect."

It probably works out that a nap of about 15 minutes is best, he says, because once you get beyond 20 minutes, you risk a deep sleep and you can be much more groggy when you wake up.

"A lot of people take caffeine after they wake up, but you have a window of opportunity of 20 minutes, so it will help you wake up. It works, there's no doubt about it."

People can't instantly fall asleep, so it's impossible to exactly time how long you will be asleep, he says. But even 15 minutes of dozing is beneficial.

"At least by having caffeine, you know that in 20 minutes you will feel more alert."

If you haven't had a wink of sleep the night before, then this tactic won't be enough to refresh you, says Mr Horne, but for those that have had merely a poor night's sleep, it will work. 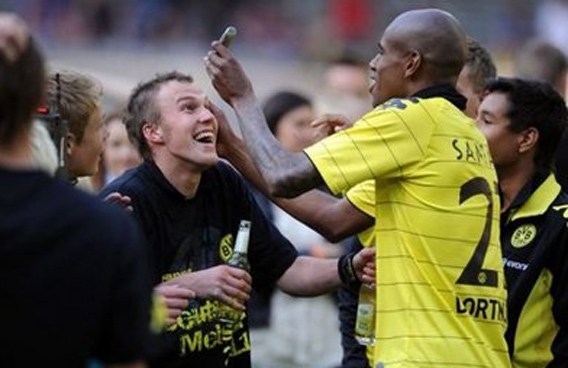 BERLIN: Kevin Grosskreutz had his head shaved in front of 80,000 people on Saturday as he made good a promise to undergo a first haircut since October as soon as Borussia Dortmund were crowned German champions.

After his side won their seventh league title, their first since 2002, with a 2-0 home win against Nuremberg, Grosskreutz, 22, allowed Brazilian team-mate Dede to shave his head on the pitch in front of 80,000 fans.

"I'm happy, I've never had my hair so long," said German international Grosskreutz as his side celebrated at their Signal Iduna Park stadium with the traditional beer showers.

"When I think back that three years ago I was still in the stands among the spectators and now we are German champions."

UK: A husband who was left blind after being poisoned with antifreeze by his former wife is to marry the woman who nursed him back to health.

Lee Knight, 41, suffered liver failure and was left fighting for his life in a five-month coma after wife Kate laced his curry with the liquid in April 2005.

But love blossomed in hospital as dialysis nurse Jackie Evans spent hours each week caring for Lee after he emerged deaf and without his sight.

Jackie was among the team who looked after Lee during the long hours on a dialysis machine in the University Hospital of North Staffordshire as he waited for a transplant to replace the kidney destroyed by the  attempt to kill him.

At first Jackie was only able to communicate with her patient by tracing the outline of words with her finger on the palm of his hand.

However a friendship developed between them -and their unusual way of talking to one another soon became their language of love.