BRITAIN: Like other eight-year-old girls, Britney Campbell loves dancing to Lady Gaga, is fond of fashion and enjoys putting on make-up.

Once every three months, Britney climbs on a beautician's table and watches as mum Kerry prepares needles of Botox and fillers to be injected into her face.

Beautician Kerry, 34, from Birmingham, buys the substances online and injects them into her daughter's forehead, lips and around her eyes.

The beauty-pageant obsessed single mum also takes her to have her body waxed, in a bizarre bid to stop her growing hair when she eventually hits puberty.

Kerry says these shocking and potentially dangerous treatments will guarantee Britney becomes famous as a teenager.

She says: "What I am doing for Britney now will help her become a star.

"I know one day she will be a model, actress or singer, and having these treatments now will ensure she stays looking younger and baby-faced for longer.

"I'm sure people reading this will think I am being irresponsible, but I ensure that I test the Botox and fillers I buy online on myself first.

"All I want is for Britney to have the best start in life, so it is easier for her to become a superstar.

"More mothers should do it for their daughters."

Kerry is proud Britney is one of the youngest children in the world to have Botox injections and fillers for beauty purposes.

Despite doctors and plastic surgeons recommending Botox only be used by adults, Kerry claims Britney is in no danger.

Kerry, who also regularly administers Botox and fillers on herself, says: "I'm proud Britney is getting to have these beauty treatments at such a young age.

"I wish that I'd had the same advantages when I was younger.

"She is a lucky little girl and is going to be famous because of the benefits I am giving her so early."

Paedophile jailed aftercouple realise they were BOTH attacked by him

BRITAIN: A paedophile was caught after two children he abused grew up to marry each other and revealed the abuse they suffered.

Steven Mizon, 65, was jailed for 11 years after being found guilty of a catalogue of offences against both victims, including raping the girl.

Guildford Crown Court heard that he was only found out because, after their wedding the couple compared notes about their troubled childhood and realised they had each been abused by the same man.

A jury was told that for years the man who was involved with a youth club in Surrey had subjected the young boy to a catalogue of sex attacks before turning his attentions to the girl.

The discovery that they had both been victims of the same abuser led to Mizon being arrested and prosecuted for rape and child sex offences.

Throughout his ten-day trial the defendant denied 13 sample counts of indecent assault, one of indecency with a child and the rape.

Four of the alleged indecent assaults and the indecency with a child related to the male complainant.

The remaining nine indecent assault allegations and the charge of rape related to the girl.

He was acquitted of two of the assaults against the girl but found guilty of all the others.

The crimes were committed between 1984 and 1990 when the defendant was living in Merstham, near Redhill, Surrey.

US: Is there nowhere Apple fears to tread?

It's stared down its rivals. It's faced off with authorities. Now Apple is taking on the biggest challenge known to man — a wife who's put her foot down.

As reports flood in that early iPad 2 buyers are experiencing problems, Apple has apparently stepped up its monitoring of product returns.

"Apple is paying close attention to all iPad 2 returns during the first few weeks to make sure there are no major production defects," said Mac Rumors.

And according to one of the site's sources, Apple staff found something they weren't quite expecting.

"One iPad came back with a post it note on it that said: 'Wife said no'," they said.

The returned product, with the note, was flagged as something funny before being noticed by two executives further up the chain.

So how did they respond?

"They sent the guy an iPad 2 with a note on it that said: 'Apple said yes'," the source said.

Russian teenagers are risking their lives in a deadly new craze - clinging to the back of Moscow underground trains as they hurtle through darkened tunnels.

It has become so common to see the youngsters - usually sporting distinctive gloves and ski goggles - leaping onto the back of underground trains that Moscowvite commuters now barely bat an eye lid.

And as they cling on for dear life with the train quickly accelerating away from the platform, they are whisked within centimetres of tunnel walls facing a near certain death should they fall.

Some have even begun clambering onto roofs to literally 'surf' the trains while others prefer to wedge themselves between carriages with nothing to hold onto.

Using cameras attached to their heads, the daredevils capture every twist and turn of their extreme escapade before uploading the footage to social network sites like YouTube and vkontakte - the Russian version of Facebook.

The phenomenon has seen massive Internet communities develop where train-surfers share and comment on each others videos.

And as the stunts get more dangerous, the more comments and 'likes' they get - boosting their online stardom.

Some groups have up to 2000 members regularly posting and commenting on videos of the extreme entertainment.

But the craze has already claimed the lives of would-be daredevils, most recently two Russian teens.

Kidnapping of dogs on the rise in Thailand 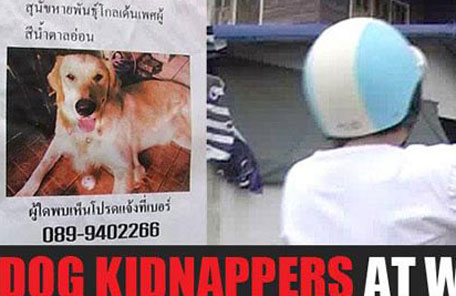 Dog kidnapping has been on rise in Khon Kaen in the past year, with the abduction of good breed dogs - especially people-friendly golden retrievers, Siberian huskies, chihuahuas and pugs.

Many pet owners are posting missing dog messages on https://www.khonkaenlink.info/. One tearfully said a S$420 ransom was demanded for her pug but, after she filed a police complaint, she never heard from then dognapper again.

Khonkaenlink webmaster Chumphon Para said more and more missing dog messages had been posted on the website over the past year; but most owners did not get their dogs back despite rewards being offered, some as high as Bt10,000.

He believed many owners didn't turn to the law to get their dogs back, fearing police would see their claims as trivial. As an alternative, many were using social media to quickly reach a wide audience.