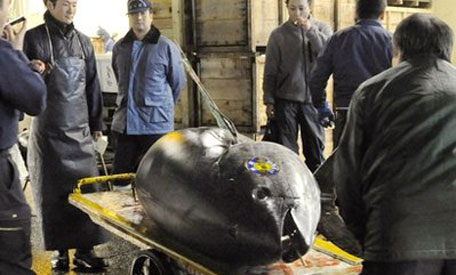 A giant bluefin tuna fetched a record 32.49 million yen, or nearly $396,000, in the first auction of the year at the world’s largest wholesale fish market in Japan.

Japan is the world’s biggest consumer of seafood, with Japanese eating 80 percent of the Atlantic and Pacific bluefins caught. The two tuna species are the most sought-after by sushi lovers.

Mexico City authorities presented a leader of a sect called "Holy Death" to the media Tuesday, along with eight others accused of belonging to a kidnapping gang.

David Romo, the leader of the so-called "Mexican-US Traditional Catholic Church," was detained along with the other gang members in the Mexican capital in December, said a statement from the city attorney general's office.

The suspects had passed themselves off as members of the Zetas drug gang and were under investigation in cases of kidnapping, extortion and theft, the Mexico City attorney general's office said in a statement.

They were detained during an operation to rescue an elderly couple, who were later freed for ransom, the statement said.

Romo had directed part of the ransom money to his "National Sanctuary of the Angel of Holy Death," the statement said.

The cult of Holy Death - represented as a skeleton in women's clothes and carrying a scythe - has extended its influence across working class communities in Mexico in recent years, as well as in the United States and some Latin American countries.

Followers leave offerings of alcohol, cigarettes and cash at altars adorned with candles.

The Mexican government declared Romo's group illegal in 2005, and the Catholic Church condemns its activities. 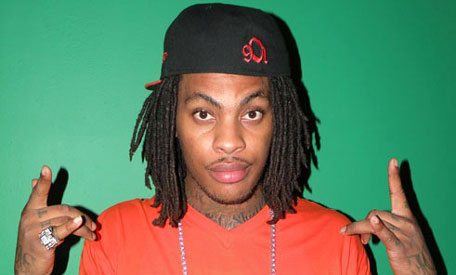 Rapper Waka Flocka Flame will spend Tuesday night in a Georgia county jail after turning himself in to police on drugs and weapons charges.

A bond hearing for the performer, whose real name is Jaquin Malphurs, has been scheduled for 8:30 a.m. local time on Wednesday, according to the Henry County Sheriff's office.

The charges followed a raid on the rapper's home last month in a suburb south of Atlanta. The artist's current album, Flockaveli, is ranked 11th on the Billboard Magazine chart of rap albums.

Louisiana's state wildlife veterinarian says at least some of an estimated 450 birds that died near Baton Rouge may have flown into a power line.

Jim LaCour said Tuesday the grackles, starlings, brown-headed cowbirds and red-winged blackbirds had broken beaks and backs. He says some live birds had broken wings but ran too fast to catch.

The bird deaths Monday came a few days after about 3,000 blackbirds fell from the sky in central Arkansas. Scientists there say celebratory fireworks on New Year's Eve likely sent the birds into such a tizzy that they crashed into homes, cars and each other before plummeting to their deaths.

Officials say such massive wildlife kills are not uncommon. 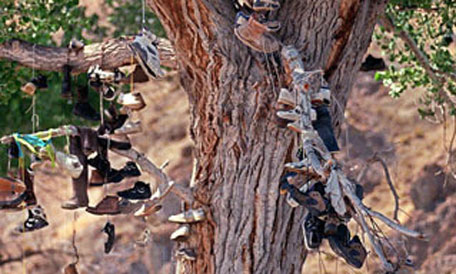 Vandals in northern Nevada have chopped down the landmark "shoe tree" that was a popular stopping point for travelers on US 50.

Authorities say the 70-foot cottonwood near Middlegate was cut down late or early Friday. Fresh sawdust was found on the snow.

Middlegate bartender Travis Anderton says the tree drew people who'd stop to see the hundreds of shoes, boots and sneakers dangling from its limbs along the highway known as the Loneliest Road in America.

His grandmother, Freeda Stedenson, is planning a memorial at the site on Feb. 13.

Could the days of the British 'pint' be numbered?

British pubgoers could soon ditch their traditional pint in favor of a "schooner", a smaller measure of beer used in Australia, under government changes announced on Tuesday.

At the moment, pubs and restaurants are limited to selling alcoholic drinks in certain measures, but the government wants to introduce a new range in response to changing trade practices and consumer tastes.

Instead of choosing between halves or pints, drinkers would also have the option of a schooner, the equivalent of two-thirds of a pint. Wine glasses would also see a change.

"We have listened to consumers and businesses. They have called for fixed quantities to be kept but with greater flexibility. That is what this change will deliver," Science minister David Willetts said in a statement.

"We are freeing businesses so they can innovate and create new products to meet the demands of their customers."

Under the proposed change, a glass of wine could be sold in measures under 75ml, much lower than the current limit of 125ml.

The Daily Mail newspaper said the new pint rule, which also applies to cider and lager, represents one of the most radical changes since the pint was introduced by an Act of Parliament in 1698.

US captain to lose command over videos

The Navy was expected to announce its decision to relieve Capt. Owen Honors of the USS Enterprise later on Tuesday, military officials said days after images from the videos began popping up on the Internet and in television news reports.

The military officials spoke on condition of anonymity.

Meanwhile, officials at the Navy's Fleet Forces Command in Norfolk, Virginia, which was expected to make the formal announcement, were not available for comment.

Honors produced, starred in and circulated the videos aboard ship three or four years ago, when he was second in command of the nuclear-powered carrier. He was later promoted to command the USS Enterprise.

It was not clear why the issue suddenly came to light years after the fact.

"This is the sort of thing you'd expect from a 19-year-old recruit. But you're dealing here with a 49-year-old senior officer and this has called his judgement into question," one official said.

The videos first surfaced over the weekend in the Virginian-Pilot newspaper. The newspaper, which serves the city of Norfolk, where the carrier is based, made video excerpts available on its website (https://pilotonline.com/).

The Virginian-Pilot said the Navy acknowledged putting a stop to the broadcasts after learning about their existence.

Honors has made no public statement about the videos. But his supporters rose to his defence on Facebook, where they applauded his leadership and described the videos as morale boosters. Associates including former crew members also defend him in TV interviews.

Air bags and the economic recession have contributed to the biggest drop in road deaths in the United States since World War II, US researchers said.

Changes in driving patterns and safety features both contributed to a 22 percent decline in road deaths between 2005 and 2009, Michael Sivak and Brandon Schoettle of the University of Michigan said in a report that studied federal data looking for the causes associated with fatal crashes.

"From 2005 to 2009, US road fatalities dropped by 22 percent (from 43,510 to 33,963). A reduction of such magnitude over such a short time has not occurred since road safety statistics were first kept (starting in 1913), except for the reductions during World War II," they wrote in the journal Traffic Injury Prevention.

"We were amazed by the magnitude of this," Sivak said in a telephone interview.

Separately, the US Centers for Disease Control and Prevention reported that 85 percent of American drivers say they use seat belts all the time, while 1 in 7 do not.

Traffic deaths in 2009 were the lowest since 1954, the US Department of Transportation said in March.

"The two general factors that we are putting our money on are technological advances, primarily air bags, and the economic downturn," Sivak said.

He and Schoettle analyzed traffic patterns and found, for instance, an overall 4 percent drop in traffic, with notable decreases during rush hour and less traffic on high-speed interstate highways. They also found fewer crashes involving trucks, along with data that less freight is being shipped.

"This supports the notion that people are cutting down on travel and staying closer to home. Traffic on local streets has increased," Sivak said.

Federal statistics include a code for factors involved in fatal crashes and they point to a big increase in inattentive driving.

"US data combine talking, eating and using cell phones in the same group. We have seen an increase of 42 percent in fatal crashes in which the coder labelled inattention as a factor," Sivak said.

Sivak said it was difficult to say how much any one factor contributed to overall deaths, but there are clues pointing to the decline in fatalities.

"We have found there has been an increase in the deployment of air bags during crashes, especially side air bags," he said. "We have been driving less and we are driving differently."