For the first time, scientists have been able to send a simple mental message from one person to another without any contact between the two, thousands of miles apart in India and France. The woman in Mumbai recieved the message from a person in France.

Research led by experts at Harvard University shows technology can be used to transmit information from one person's brain to another's even, as in this case, if they are thousands of miles away.

"It is kind of technological realisation of the dream of telepathy, but it is definitely not magical," Giulio Ruffini, a theoretical physicist and co-author of the research, told AFP by phone from Barcelona.

"We are using technology to interact electromagnetically with the brain." 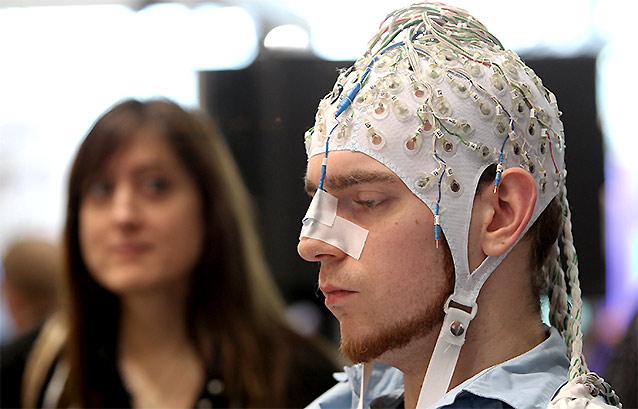 For the experiment, one person wearing a wireless, Internet-linked electroencephalogram or EEG would think a simple greeting, like "hola," or "ciao."

A computer translated the words into digital binary code, presented by a series of 1s or 0s.

Then, this message was emailed from India to France, and delivered via robot to the receiver, who through non-invasive brain stimulation could see flashes of light in their peripheral vision.

The subjects receiving the message did not hear or see the words themselves, but were correctly able to report the flashes of light that corresponded to the message.

"We wanted to find out if one could communicate directly between two people by reading out the brain activity from one person and injecting brain activity into the second person, and do so across great physical distances by leveraging existing communication pathways," said co-author Alvaro Pascual-Leone, professor of neurology at Harvard Medical School.

"One such pathway is, of course, the Internet, so our question became, 'Could we develop an experiment that would bypass the talking or typing part of Internet and establish direct brain-to-brain communication between subjects located far away from each other in India and France?'"
Ruffini added that extra care was taken to make sure no sensory information got in the way that could have influenced the interpretation of the message.

Researchers have been attempting to send a message from person to person this way for about a decade, and the proof of principle that was reported in the journal PLOS ONE is still rudimentary, he told AFP.

"We hope that in the longer term this could radically change the way we communicate with each other," said Ruffini.