A San Diego woman who was showering in her second-floor apartment has been injured after she fell through a window and into a 15-foot light shaft.

Authorities say the woman was showering, lost her balance and fell through an open window, measuring 2 feet by 3 feet, into the shaft.

The woman landed at the bottom of the shaft and firefighters rescued her by lifting her into a first-floor apartment window.

Battalion Chief David Connor says it was "an odd or freakish type of accident."

Each apartment has a bathroom window into a shaft that is designed to bring light from the rooftop to interior rooms. 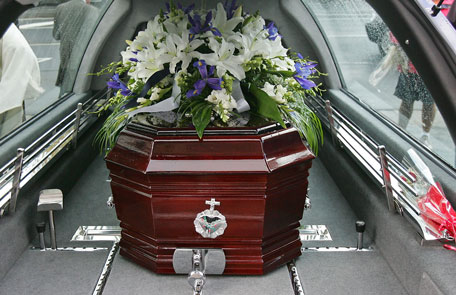 Beverly Hills police say a hearse driver who was found dead with a body in the vehicle died while taking the casket to a funeral.

Lt. Lincoln Hoshino says authorities were alerted that a body was slumped over in the driver's seat of a hearse parked near the Beverly Hills Hotel at about 3 p.m. Monday.

Hoshino says the investigation is in its early stages but the woman appears to have died of natural causes, with no weapons or evidence of violence discovered. Coroner's investigators will make a final determination of the cause of death.

The woman's relatives have not been notified yet and her identity has not been released.

Police could not immediately say to what funeral home or cemetery where the body was being sent.