Captain Steve Smith and George Bailey struck fluent centuries as Australia chased down a steep 310-run target to win the first one-day international against India by five wickets in Perth on Tuesday.

Smith fell for his highest ODI score of 149 with Australia two runs short of victory and the right-hander left the ground shaking his head before watching his team seal victory with four balls to spare.

Opener Rohit Sharma smashed an unbeaten 171 to lift India to 309 for three after the touring side won the toss and chose to bat first in sublime batting conditions at the WACA ground.

India lost Shikhar Dhawan (nine) early but Rohit, the only cricketer with two double centuries in this format, and test captain Virat Kohli (91) laid the platform for a late flourish with a 207-run stand for the second wicket.

India left-arm paceman Barinder Sran (3-56) gave his side a dream start on his debut by dismissing hard-hitting openers Aaron Finch (eight) and David Warner (five) in successive overs to reduce Australia to 21 for two.

But Bailey (112) scored his third ODI hundred and added 242 for the third wicket with his skipper to take the match away from India.

through to wicketkeeper Mahendra Singh Dhoni.

India also missed several opportunities to run the right-hander out when their throws failed to hit the stumps.

Off-spinner Ravichandran Ashwin sent back Bailey and Glenn Maxwell (six) in successive overs to give India hope but it was too little, too late.

The 28-year-old Rohit, whose 264 against Sri Lanka in 2014 remains the highest individual score in the 50-over format, hit 13 fours and seven sixes.

Rohit's 163-ball knock was the highest score by a visiting batsman against Australia, overtaking West Indies great Viv Richards's unbeaten 153 in 1979 in Melbourne.

Kohli fell in unselfish manner trying to score quickly for his team and was out caught close to the boundary rope by Aaron Finch off paceman James Faulkner, who finished with figures of 2-60 in his 10 overs.

Paceman Scott Boland made a forgettable debut for Australia as he gave away 74 runs in his 10 overs while the other debutant Joel Paris also went wicketless, conceding 53 in his eight.

Brisbane will host the second match of the five-game series on Friday.Centuries by skipper Steven Smith (149) and George Bailey (112) helped Australia cruise past India by five wickets in the first ODI at the WACA, Perth, on Tuesday.

Maxwell goes for a heave but lands the ball in Dhawan's hands, good catch there as it was a skier. Ashwin gets his second wicket.

Bhuvneshwar takes a good catch on the long off boundary to send Bailey back after he scored a brilliant 112.

Jadeja is taken to the cleaners by Smith with a six and a four.

Smith and Bailey bring up the 200-run partnership from 203 balls.

Smith and Bailey bring up the 150-run partnership

SIX: Bailey hits a big one and the bowler is Ashwin who is looking ordinary as Smith to spanks him for a huge maximum.

Smith too gets to his 50, his 9th ODI half century.

Smith and Bailey bring up the 100-run partnership from 112 balls.

Bailey gets to his half century.

Bailey and Smith are looking comfortable. After 20 overs Australia may have lost a wicket more to be 107-2 but are ahead of as India who were 93-1 at the same stage.

Smith and Bailey bring up the 50-run partnership.

Runs are hard to come by but a loose ball from Bhuvneshwar is punished by Bailey. Aus 40-2, 10 overs.

Bailey survives a close call from the very next ball by Sran. The batsman seemed to have gloved it but the umpire thought otherwise. That could have been three wickets for Sran.

Sran strikes a double blow to Australia getting rid of another danger batsman in Warner.

Sran gets his maiden international wicket in his second over with a caught and bowled. Good reflexes from the newcomer bending low to get both hands to it.

A superb 171 from opener Rohit Sharma helped India to an imposing total of 309-3 in the first one day international against Australia at the WACA ground in Perth on Tuesday.

Virat Kohli also made 91 after India won the toss and elected to bat in what was a baptism of fire for Australia's debutant pacemen Joel Paris and Scott Boland.

Indian captain MS Dhoni won the toss and chose to bat in the first one-day international against Australia at the WACA in Perth on Tuesday.

India handed a debut to left-arm seamer Barinder Sran, while for Australia, pacemen Scott Boland and Joel Paris will be playing their first international matches.

With this knock Rohit becomes the fastest to 1000 ODI runs against Australia, his runs coming in 19 innings, ahead of Tendulkar and Lara.

SIX: Runs flowing from Rohit's willow, whacks his 7th six of the match.

Great catch by Boland diving to his right to get rid of the Indian captain.

SIX: Sixes flow from Rohit's bat and Boland is the culprit bowling full tosses to hand him easy pickings.

SIX: Rohit bends low and pulls Boland over the ropes.

SIX: Dhoni, after a few misses, charges down and lifts Faulkner over his head.

Kohli steps out and hits Faulkner flat and hard but Finch runs to his left and takes the catch at long-on. Ind 248-2, 45 overs.

FOURS: Kohli makes room on the leg and spanks Marsh twice through off side to get closer to his 24th ODI ton.

FOUR: Rohit just glides Hazlewood, who pitched it outside off-stump, to long off boundary.

FOURS: Rohit has stepped on the pedal here, sending Boland through mid-on and twice down leg side as India are looking good for 300. Ind 216-4, 40 overs.

A controlled shot from Rohit brings up his ton, his 9th in ODIs and fourth against Australia as India build on their score to 189-1.

FOUR: Kohli guides this one from Faulkner on the leg side to the ropes.

FOUR: Kohli scoops Marsh over cover to get into his 60s, while Rohit moves in the 90s.

SIX: Kohli brings up his half century with a six over long leg. This was Kohli's first 50 in ODIs in Australia versus Australia.

FOUR: Well executed shot by Rohit off Faulkner angling it away and over the keeper. India 149-1, 30 overs.

Rohit charges down the wicket and hoists Maxwell over his head.

SIX: Rohit goes down and launches Marsh over mid-wicket and mid-on.

FOUR: Rohit tries to pull Faulkner, not in control of the shot though, but the top edge flies over the keeper. 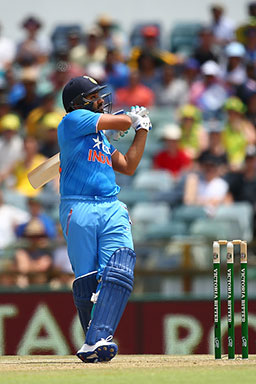 Rohit Sharma of India hits a six during the Victoria Bitter One Day International Series match between Australia and India at WACA on January 12, 2016 in Perth, Australia. (Getty)

Rohit Sharma and Virat Kohli have laid the foundation here for India to post a big score.

FOUR: After five dot balls, Rohit finally sends James Faulkner to the ropes with a straight drive past the bowler. What a shot! Ind 79-1, 15 overs.

FOUR: Kohli looks in good nick thumping another half volley on the pads from Boland through mid-wicket and mid-on.

FOUR: Classic front foot half volley shot from Kohli and the ball races past the mid-off fielder. Marsh was too full on this occasion.

FOUR: Mitchell Marsh's first two balls go for eight runs. Straying down the leg side Rohit has no problem putting those balls away.

FOUR: Kohli finds the gap through the leg side and then hits one past the bowler. Ind 52-1, 10 overs.

FOUR: Dhawan goes on the front foot and times his cover drive to perfection.

SIX: Rohit has pulled this short ball from Paris into the stands.

Rohit has no control to this bouncer from Hazlewood although he tried the pull shot but only top edging it over a leaping wicketkeeper Wade for four.

FOURS:Rohit Sharma's defensive shot off Hazlewood's first ball fetches him two runs and then the next ball he finds the gap with a half volley for four through mid-on, then the fourth ball goes for 4 leg byes and India are off to a good start.

We are done with the national anthems and play is about to begin.

Injuries to fast bowlers Mohammed Shami and Mohit Sharma have taken sting out of the Indian attack and they will be without Suresh Raina's all-round energy after the limited-overs specialist was dropped from the side.

India are likely to blood Barinder Sran, Gurkeerat Singh and Rishi Dhawan in the series and Dhoni acknowledged he will have to be patient with the uncapped trio.

"As far as newcomers are concerned, we'd definitely feature them in the tournament because we want to see where they stand," Dhoni said ahead of the first match of the five-game series against the world champions on Tuesday.

The 2011 World Cup-winning captain, who quit Tests in late 2014, believes the supply of talented young players who can immediately adapt to international cricket is at an end.

"Right from the late 1980s, we got cricketers who were ready to play international cricket," Dhoni said. "Once they made their debut, they were there for 10-15 years. I think that trend is changing slowly."

India will feel Shami's absence most, the 25-year-old returning from a lengthy injury layoff only to land in Australia and be ruled out for the series with a hamstring injury.

"Shami has been very good for us. If you see (last year's) World Cup also, he was someone who bowled really well for us, someone who can bowl with the new ball, in the middle over and also at the death," Dhoni said.

India play five one-dayers and three Twenty20 Internationals on their tour of Australia.