Pakistan skipper Misbah ul Haq and Asad Shafiq defied South Africa with a dogged fourth wicket partnership of 101 off 274 balls on the third day of the 1st Test at The Wanderers in Johannesburg on Sunday.

The tourists finished on 183 for 4 at stumps needing to survive two days or score another 297 runs for victory after being set a record target of 480 by South Africa who declared their second innings at 275 for 3.

Misbah remained unbeaten on 44 off 138 balls with seven boundaries while Shafiq completed his seventh Test half century being 53 not out with nine boundaries after facing 144 balls.

The good news for Pakistan is there is a forecast of rain on the fourth day with the final session being played under lights in overcast conditions on Sunday.

However, the Pakistan batsmen showed plenty of character during their second essay after having been bowled out for their lowest Test total of 49.

Debutant Nasir Jamshed set the tone of the innings with a fluent knock of 46 which was spiced with eight hits to the fence, despite the early dismissal of Mohammad Hafeez.

Jamshed was associated in a 57-run stand for the second wicket with Azhar Ali before falling short of a well deserved half century on his Test debut. 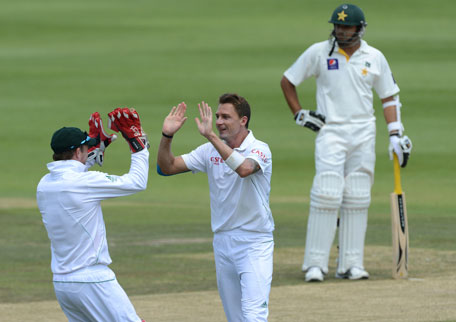 His dismissal triggered another collapse as Pakistan slipped to 82-4 in the 30th over with Azhar Ali and Younis Khan following him back to the pavilion.

But Misbah dropped anchor and found an able ally in Asad Shafiq as they spearheaded a magnificent fightback with tremendous application and determination to frustrate South Africa who failed to get a breakthrough in the final session.

South Africa had raised hopes of an early finish and a  huge win when they grabbed three wickets in the afternoon session but Lady luck smiled on the Pakistan pair who each got a reprieve.

Shafiq was held at first slip by Smith off Philander who had overstepped while Misbah was dropped by Peterson off Kallis in the next over.

They frustrated South Africa in the final session scoring 79 runs without loss in 35 overs but more importantly surviving to fight another day.

South African captain Graeme Smith closed the innings after AB de Villiers had completed his century having added 61 runs in nine over in the morning.

De Villiers remained unbeaten on 103 together with Hashim Amla (74), the pair having added 176 runs for the unbroken fourth wicket.

Misbah and Asad Shafiq have brought up the 100 partnership for the unbroken fifth wicket off 259 balls.

Pakistan are 183-4 after facing 74 overs in their second innings on the third day of the first Test after South Africa set them a mammoth target of 480 at The Wanderers in Johannesburg on Sunday.

Asad Shafiq completed a well deserved half century off 117 balls, his seventh in Tests, with a lovely square cut off Philander for his ninth boundary.

Misbah punishes a wide delivery from Kallis with an expansive cover drive for his sixth boundary and steers him to the third man fence in his next over as runs come easily for Pakistan now.

Misbah ul Haq is dropped by Peterson at point to the disappointment of Kallis as Pakistan get a double reprieve.

Asad Shafiq survives after an inside edge off Vernon Philander went agonisingly pass the stumps and is caught by Smith at slip but declared a no ball because the bowler had overstepped.

Asad Shafiq has moved into the 40s whipping Peterson to the leg for his seventh boundary.

Misbah ul Haq has hit a lovely cover drive off spinner Peterson following a maiden over bowled by Morkel giving some food for thought for South African skipper Graeme Smith.

Asad Shafiq has stepped and lofted Peterson to the long off boundary to get out his shell.

Asad Shafiq stepped up the tempo of the Pakistan innings whipping a couple of boundaries off Morkel to bring up their 50 partnership for fifth wicket off 150 balls.

Misbah ul Haq innovates executing a paddle sweep to perfection off Peterson for his third boundary.

Dale Steyn has sent down a maiden over to Asad Shafiq while Morne Morkel chokes Misbah ul Haq punctuated by a single from Peterson's over as runs dry up for Pakistan.

Misbah ul Haq survives another confident leg before appeal off Vernon Philander which appears to go over his stumps while Robin Peterson denies him a boundary by dragging it back inches from the line.

Dale Steyn is on fire and can't believe his eyes as Misbah ul Haq is given not out to a beautifully delivered late outswinger which is 'caught' behind by AB de Villiers and then survives a leg before appeal which raps his pads off a thick edge in an eventful maiden over.

It's a survival battle for Pakistan as they resume on 104 for 4 after the tea interval with Dale Steyn back into attack.

Misbah ul Haq shows some aggression pulling Vernon Philander just wide of Hashim Amla to the midwicket fence for his second boundary though surviving a couple of deceptive deliveries in the final over before the tea interval.

Pakistan double their first innings tally of 49 completing 100 in their second essay after 38.1 overs with a couple from Asad Shafiq off Peterson.

Morkel has bowled a maiden over this time to Shafiq.

Misbah has played down a maiden in the first over bowled by left arm spinner Robin Peterson.

Asad Shafiq has flicked Morkel to the short leg boundary with a confident stroke.

Misbah ul Haq finally gets off the mark with a boundary to third man off Kallis.

Asad Shafiq opens his account with a streaky boundary to fine leg off Morkel.

Jacques Kallis sends down another maiden as Misbah ul Haq is still to open his account.

Morne Morkel finally gets Younis Khan who fails to take away his bat in time getting a faint outside edge for AB de Villiers to pocket it easily.

Khan made 15 off 24 balls with two boundaries with Misbah yet to open his account.

Younis Khan attempts to break the shackles cutting a rising delivery from Morkel to the third man fence.

Pakistan's most experienced batsmen Younis Khan and Misbah ul Haq have played down successive maiden overs from Morkel and Kallis.

Younis Khan survives a confident appeal for a leg before in the next over from Kallis which was upheld despite a decision review and then drives the next ball through the covers for a boundary.

Jacques Kallis strikes with the fourth delivery of a new spell trapping Azhar Ali leg before with Pakistan being unsuccessful with the decision review.

Ali battled 68 balls for his 18 which contained two boundaries being undone by a ball which nipped back and hit on the knee roll.

Dale Steyn is bowling with his tails up and plenty of fire after seeing the back of Nasir Jamshed.

Nasir Jamshed is unfortunate to be dismissed four short of a well deserved half century on his Test debut when he pulls Dale Steyn straight to Robin Peterson at short mid wicket.

Jamshed's fluent knock of 46 off 64 balls contained eight boundaries and added 57 for the second wicket off 106 balls with Azhar Ali (15 not out).

Vernon Philander has bowled a maiden to Nasir Jamshed who is displaying sound temperament and compact defence as he nears his maiden half century on his debut.

Azhar Ali has finally got it in the middle stroking a superb boundary with a carpet drive off Dale Steyn who is having some concern with his left foot.

Nasir Jamshed hit a lovely cover drive off Vernon Philander to bring up the 50 partnership for the second wicket in 88 balls with Azhar Ali.

Vernon Philander is causing some problems for Azhar Ali getting deceptive seam movement.

Pakistan's 50 comes off 93 balls in the third over after lunch.

Vernon Philander and Dale Steyn back into the attack after lunch on day three.

Pakistan manage to get to their first innings total of 49 without much ado.

Nasir Jamshed is unbeaten on 39 off 47 balls having hit seven boundaries so far while Azhar Ali is with him on 5.

Vernon Philander dismissed Mohammad Hafeez with just seven on the board in the fourth over of the innings.

South Africa declared their second innings with a lead of 479 after AB de Villiers reached his century in the ninth over of the morning.

The highest successful run chase in Tests is 418.

AB de Villiers completed his 15th Test century and second against Pakistan by punching Umar Gul wide of cover soon after which skipper Graeme Smith called them back to the pavilion.

South Africa declared at 275 for 3 continuing from their overnight 207-3 on the third morning after having skittled out Pakistan for their lowest ever Test score of 49. 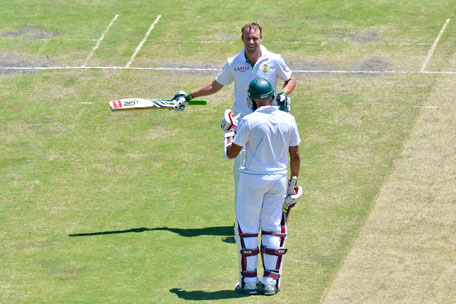 AB de Villiers (above) was unbeaten on 103 off 117 balls which contained 11 fours while Amla was not out on 74 off 114 balls with seven boundaries.

The unbroken fourth wicket partnership between the pair yielded 176 runs off just 117 balls adding 68 runs off nine overs on the third morning.

Jacques Kallis sends down a maiden in his second over to Azhar Ali.

Nasir Jamshed survives a snorter from Morkel which falls just off the fielder at backward short leg before picking up another boundary driving it past point with superb timing.

Morne Morkel goes for plenty in his second over with Jamshed pulling a short delivery to the short leg fence while Azhar Ali forces one through mid off for his first boundary but he is living dangerously fishing outside the off while another ball kept low.

Dale Steyn hurls down a second consecutive maiden over with Azhar Ali surviving after slashing and missing a widish delivery.

Morne Morkel into the attack now replacing Vernon Philander and immediately beats the bat of Nasir Jamshed who replies with a superb timed off drive for his third boundary.

Dale Steyn has bowled a maiden over unleashing a barrage of short pitched deliveries to new batsman Azhar Ali as he tries to generate some movement off the pitch.

Nasir Jamshed edges Philander with soft hands through the slip cordon to third man for his second boundary to move into double figures.

Pakistan lose their first wicket as Mohammad Hafeez is brilliantly caught behind by AB de Villiers diving to his left off Vernon Philiander in the fourth over of the innings.

It is almost a replay of the first innings with the only difference being Philander is the one who dismisses Hafeez not Steyn.

Hafeez survives 10 balls to score 2 runs before edging behind attempt to turn it around the corner.

Dale Steyn has sent down a maiden over to Mohammed Hafeez.

Nasir Jamshed hit the first boundary of the innings easing Dale Steyn through mid off. in the first over while Vernon Philander gives away just one run in his over. 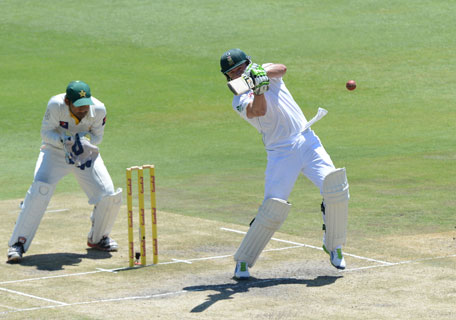 AB de Villiers (above) is batting superbly punching an attempted yorker from Umar Gul back past the bowler to the boundary to move to 99.

Runs continue to flow off the blades of Hashim Amla and AB de Villiers.

Saeed Ajmal is back into the attack as Misbah ul Haq is desperate to break the fourth wicket partnership of Hashim Amla and AB de Villiers which has produced 150 runs so far.

The 150 partnership off 192 balls comes with a single by Amla while AB de Villiers attacks Ajmal with a reverse sweep to the point boundary as South Africa step up a gear.

Left armer Junaid Khan is all at sea against AB de Villiers and Hashim Amla who have punched him to the boundary on either side of the wicket.

Hashim Amla has smacked Umar Gul for a couple of consecutive boundaries through backward point and extra cover.

AB de Villiers hits the first boundary of the third morning when he opens the face of the bat and glides Junaid Khan to third man in the second over.

The million dollar question is when South Africa will declare as they resume on the third day of the 1st Test against Pakistan with a lead of 411 runs at The Wanderers in Johannesburg on Sunday.