President His Highness Sheikh Khalifa bin Zayed Al Nahyan received members of the UAE national football team at the Al Rawda Palace in Al Ain on Saturday, a day after their historic victory at the 21st Gulf Cup.

President His Highness Sheikh Khalifa bin Zayed Al Nahyan today emphasised his interest in supporting all sports activities which would promote the civilized image of the UAE in different spheres.

Sheikh Khalifa made his remarks at the Al Rawdha Palace in Al Ain as he received members of the UAE National Football Team.

"The achievement made by the sons of the UAE at this big Gulf event swept the UAE with joy and renewed our continuous celebration of our achievements.

“It is an opportunity to show our solidarity and eternal love for this generous country," the President said as shook hands with the team members in presence of Sheikh Sultan bin Zayed Al Nahyan, the President's Representative.

Congratulating the people of the UAE for this achievement , Sheikh Khalifa added: "Achievements cannot be made out of nothing.

“Rather, they are made through diligent work, patience and self-belief and, above all, through love to the country, as we all walk the same path and seek to make our state and its pride the ultimate and highest goal."

Noting that sports have become a  high priority in the UAE, he added that their development and achievements reflect growth, evolution and prosperity in all spheres.

He hailed the high morale of the national team, which allowed it to win the 21st Gulf Cup Football Tournament, and the efforts of technical and management team led by coach Mahdi Ali to harness all the capabilities of the youth to claim the title.

"Championships, results and hoisting the country's flag high is not possible without diligence, dedication, love to the country, efforts as well as the realisation of the potentials being harnessed. This was achieved last night and we want it repeated at future championships."

His Highness Sheikh Khalifa reiterated his interest in extending continuous support to all sports and sportspeople in the UAE in order to enable the youth to hoist their country's flag even higher at all events in the UAE and abroad.

Adding that sports, their evolution shown in various games as well as regional and international championships and achievements, all clearly reflect development achieved in other spheres, he noted that the UAE's interest in sports is as high as it is in any other sphere.

President Khalifa urged the champions of 21st Gulf Cup Football Tournament to consider this achievement as a first step to more achievements in order to reflect the growth and development the UAE has achieved.

He also urged them to set a good example for the youth with their good manners.

Expressing his pleasure to have this outstanding constellation of Emirati youth, the President noted that the thrill that swept the country after the match last night reflect all sincere efforts of the people of the UAE and its loyal youth.

The team members pledged to President His Highness Sheikh Khalifa bin Zayed Al Nahyan to continue the march, make efforts to claim more titles at future championships as a token of loyalty and sincerity to their country and its wise leadership who continues to provide all support and capabilities for success and winning.

They expressed heartfelt appreciation and gratitude for President His Highness Sheikh Khalifa bin Zayed Al Nahyan for his huge support during this championship and all other competitions.

They also stressed that they will work on realising the aspirations of His Highness, achieving more titles and hoisting their country's flag at all future events.

Meanwhile, offers of rewards have started to pour in for the team members. The sons of His Higness Shaikh Hamdam Bin Rashid al Maktoum, Deputy Ruler of Dubai and UAE Minister of Finance, expressed their appreciation to the team's effort.

Shaikh Rashid and Shaikh Saeed offered Dh12 million in "appreciation of the achievement made by the team".

Cup dedicated to the leadership and people

"Although this win is earned by the UAE, it is Pan-Gulf (Khaliji) for me, and peoples of other Gulf nations too have the right to celebrate it with us. I thank the people of the UAE and fans who have strong belief in the players' abilities," Al-Serkal remarked as he lifted the trophy at the National Stadium in Manama on Friday night.

The UAE's coach, Mahdi Ali, said "I am proud of being the first national coach to lead the UAE to claim their Gulf Cup title, for the second time ever, and for the first time abroad. I am extremely happy that I am the first Emirati to lead our team to this victory. It is really wonderful." This is the UAE's second title in the regional championship, six years after having won it for the first time since its inception in 1970.

Substitute Ismail Al Hammadi scored the winner in the 107th minute as thousands of UAE fans, flown in by chartered flights specially for the title showdown, roared in celebration.

Al Hammadi, who replaced Ali Mabkhout in the 62nd minute, latched on to a pass from Amer Abdulrahman and neatly slid the ball past the right of Iraqi goalkeeper Noor Sabri.

Omar Abdulrahman had conjured the lead for the UAE in the 28th minute while Iraq captain Younis Mahmoud Khalaf equalised nine minutes from time.

Abdulrahman's solo goal was the best of the championship as the 21-year-old slipped into the penalty box before slamming the ball to the left of Sabri.

Iraq had to wait till the 81st minute to get back into the match with Khalaf, in front of goal, coolly slotting the ball past goalkeeper Ali Khaseif for his second goal of the championship.

Khalaf could have sealed the match six minutes later when he did well to beat Abdulaziz Sanqor inside the penalty box but he shot directly at Khaseif. 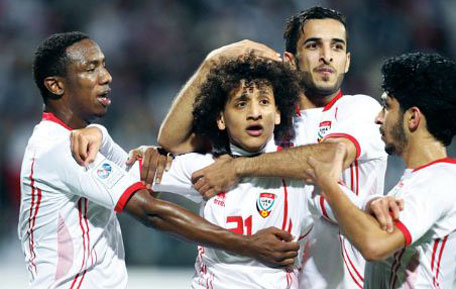 Mabkhout had the first attempt on goal in the eighth minute from the left and a few minutes later Ahmad Khalil, who scored the last-minute winner against Kuwait in the semi-finals, tried from the right but on both occasions Sabri came to Iraq's rescue.

For Iraq, Ahmed Yasin and lone stiker Khalaf made a couple of encouraging moves midway through the first-half but were thwarted by UAE defenders.

UAE could have doubled their lead early in the second half as Amer Abdulrahman's powerful long ranger from the left went slightly wide and Khalil's attempt from close was also off target.

Iraq came up with their own attack in the 58th minute when Adnan made a move from the left but his powerful left-foot drive was punched away by a diving Khaseif.

UAE, made up mostly of players who were part of the national team which took part in the 2012 London Olympics, kept pressing for the second goal but failed to find a way past goalkeeper Sabri.

For UAE coach Mahdi Ali, the only one of two native coaches among the eight nations in the fray, it was a moment of crowning glory having earlier steered his team to victory in the 2008 AFC Under-19 Championship, a silver medal at the 2010 Asian Games and a berth in the 2012 Olympics.

It was UAE's second title in this prestigious regional championship, six years after having won it for the first time since its inception in 1970.

There was an outpouring of spontaneous celebrations all over UAE with many having been glued to large screens put in malls.

Fans also took the streets in jubilation in a noisy all-night celebration all over UAE.

Maradona: I wish to spend my life in Dubai

More than 1 million use public transport daily in Dubai

We are the champions: UAE revels in Gulf Cup victory