UAE sets up date with destiny: Will play Iraq in Gulf Cup final

Ahmad Khalil scored a last-gasp goal to guide the United Arab Emirates into the final of the Gulf Cup with a 1-0 victory over defending champions Kuwait on Tuesday in Bahrain.

After missing a host of chances, Khalil who struck the woodwork in the first half, put UAE through with an 89th minute strike.

The Whites are seeking their second Gulf Cup Cup title and first since 2007.

The all-important goal came seconds into the final minute of regular time when the never-say-die Omar Abdulrahman initiated a move inches outside the penalty area on the left and sent Abdulaziz Sanqor through with a well-timed diagonal pass.

Sanqor did well to beat his marker Mohammed Frieh and send a cross past the face of the goal to Khalil, who jabbed the ball low and to the right of Kuwait goalkeeper Nawaf Al Khaldi.

It was Khalil’s (below) third goal of the championships and the UAE stands, packed with fans especially flown in by 21 chartered planes, went wild.

The UAE, whose previous Gulf Cup victory came in 2007, will take former Asian champions Iraq in the final on Friday. 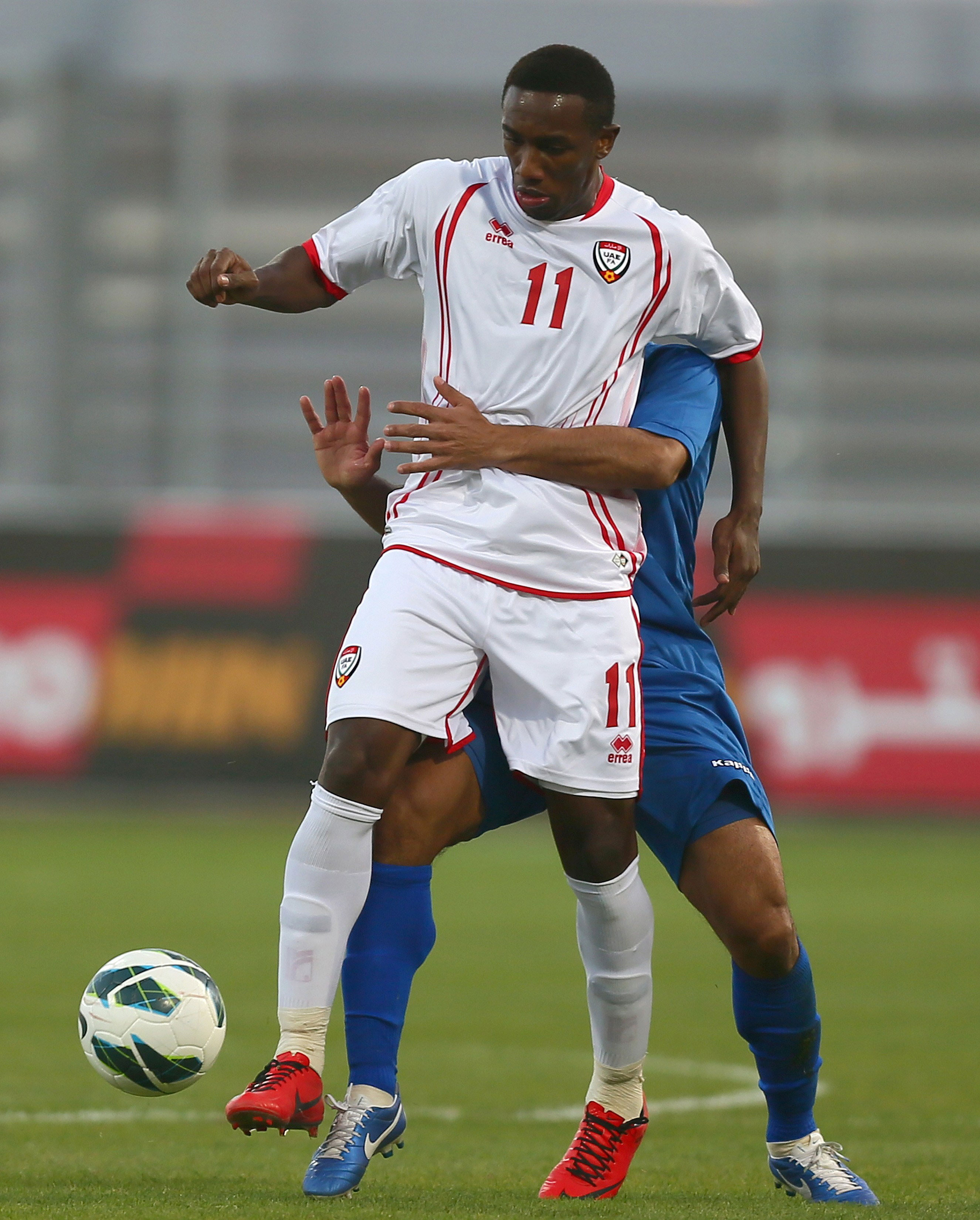 Iraq beat Bahrain 4-2 in a penalty shootout to seall their place in the final.

Iraq, gunning for its fourth Gulf title, took the lead in the 18th minute courtesy of its top striker Younis Mahmood, only for Bahrain to equalise on the hour mark through Hussain Baba.

In the shootout, Mahmoud made it 3-2, before Bahrain's Abdulwahab Al Malood missed.

It was left to Iraq's Noor Sabri to seal the victory and a place in Friday's final.

The first semifinal was a match of two equal halves with the UAE dominating the first and 11-time champions Kuwait the second.

Both teams came close to scoring, with the UAE’s best chance coming in the 60th minute when a long-range free-kick by Khamis Ismael struck the crossbar and bounced back twice off the shoulder of Kuwait goalkeeper Khaldi.

Nine minutes later it was a close shave for Khaldi’s Emirati counterpart Ali Khaseif as Fahad Al Ansari, Bader Al Mutwa and Hussain Hakem all had their close shots saved, the Emirati defence just managing to scramble the ball clear.

Kuwait had another chance in the 86th minute when second-half substitute Fahad Al Enezi covered the length of the ground but could not shake off his markers and his move went abegging.

Mahdi Ali's (above) men had been at their attacking best between the 20 and 30th minutes when they created a flurry of chances with short and fluent passing and pleasing footwork inside the penalty area.
Khalil first tested Khaldi, swiftly followed by efforts from Abdulaziz Al Balooshi and Omar Abdulrahman.

At the other end, Kuwait’s influential midfielder Mutwa continued to play a key role in conjuring most of his team’s moves with some deft and delicate passes, mainly to lone striker Yousef Al Salman.

Salman’s first decent attempt at goal came as late as the 35th minute with a long-range effort and eight minutes later he was in the thick of action again, heading a well-taken Mutwa free-kick just over the crossbar.

But it was UAE who again came close to scoring just before half-time as Balooshi and Abdulrahman combined well just outside the Kuwait penalty area to create a chance for Khalil, but the latter could not shake off his markers and his shot crashed into the near post.

The UAE and Khalil’s patience and perseverance paid off in the final minute, however, a just reward for a team mainly made up of players who took part in the 2012 London Games.