The internationally-renowned competition is the highlight of the Dubai endurance season and is organised by the Dubai Equestrian Club.

The 2016 renewal is the ninth year for the prestigious annual ride and will feature an impressive roster of 64 international competitors from 27 countries including, for the first time ever, a rider from Thailand.

This came just four months after his monumental victory in the 2014 FEI World Endurance Championship in Normandy, France.

Juan-Carlos Capelli, Vice President of Longines and Head of International Marketing, said: “We are happy to be partner for the sixth year of the unique 160km endurance competition in Dubai as the Presenting Partner, Official Timekeeper and Official Watch of His Highness Sheikh Mohammed Bin Rashid Al Maktoum Endurance Cup.”

Mohammed Essa Al Adhab, General Manager of DEC, said: “His Highness Sheikh Mohammed Bin Rashid Al Maktoum Endurance Cup is a goal for endurance riders not only in Dubai but from around the world. In addition, the World Endurance Championships victories earned by His Highness Sheikh Mohammed Bin Rashid Al Maktoum, Prime Minister and Vice President of the UAE and Ruler of Dubai and his son, Sheikh Hamdan Bin Mohammed, Crown Prince of Dubai, serve as an inspiration to both current and future generations of Emirati riders.

"Looking ahead to this weekend, we welcome all competitors to Dubai for a great day of competition and wish them a safe ride and lasting memories of this celebrated event.

“We would like to extend our special appreciation to our presenting sponsor, Longines – a distinguished brand that has long been a major supporter of equestrian sports in Dubai and around the world.”

Competitors will be vying for the chance to lift a newly-commissioned trophy that will be awarded to the winner of the renowned 160km contest.

The glittering trophy which stands one metre in height and weighs 20 kilograms, was unveiled at a press conference at Meydan on Thursday. 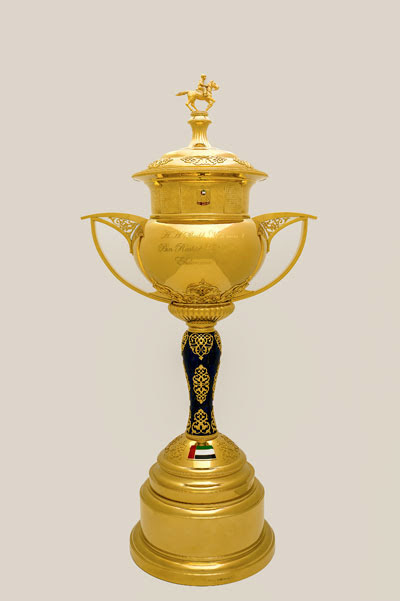 It is topped by a three-dimensional horse and rider - the figure representing the victory by His Highness Sheikh Mohammed in the 2012 FEI Longines World Endurance Championships held in Euston Park, England.

The rider’s arm is raised overhead in victory and holds a single diamond in the hand. The diamond is .32 carat and a brilliant H color that will be offset by the gold hand that serves as its setting.

Featured just below the trophy’s crown, is the poem, ‘Entisar’, written by His His Sheikh Mohammed bin Rashid.

The poem was penned by Dubai’s Ruler as a tribute to honour his horse following victory in the 2012 championship.

Expertly engraved in Arabic, the poem is repeated on the opposite side. The trophy’s body is 85cm and is finely decorated with an Arabesque motif.

Immediately below the horse and rider are two UAE coats of arms that face towards the front and back.

The design is balanced by a pair of UAE flags prominently featured just below the trophy stem. The stem is adorned with a gold Arabesque motif and crafted from Lapis Lazuli, an intense blue-coloured stone.

Endurance riding requires the rider and horse to work in perfect harmony as a team. They must manage pace to complete extreme distances in the fastest time while passing stringent veterinary examinations that ensure the horse is not under fatigue and stress.

The event will be divided into five stages. After the completion of each stage, the horses are rested and refreshed and undergo a veterinary exam to determine if they meet the physical standards to continue to the next stage.

The horse that finishes first, as well as all finishers, must successfully complete a post-race veterinary exam to determine they did not fail to meet the physical standards set forth by the sport. It is only after the final veterinary exam that the official order of finish is determined and announced.