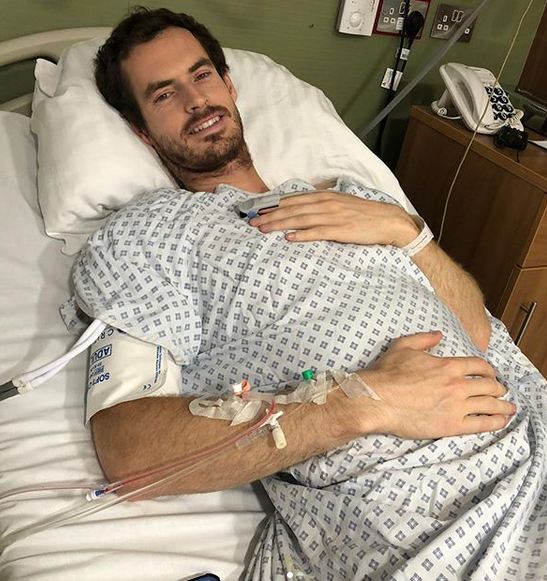 The two-time Wimbledon champion had been weighing up the pros and cons of the operation, which involves putting a metal plate into the joint, in one last bid to prolong a career plagued by injury.

The 31-year-old double Olympic gold medallist had previously said ahead of this month's Australian Open earlier that he intended to retire following the 2019 edition of Wimbledon.

"I underwent a hip resurfacing surgery in London yesterday (Monday) morning... feeling a bit battered and bruised just now but hopefully that will be the end of my hip pain," Murray said on Instagram.

There are no guarantees that the operation will allow Murray to play top-flight tennis again but it should enable him to live a pain-free life off the court.

At the Australian Open, Murray showed his competitive spirit and talent were undimmed in a five-set defeat by Roberto Bautista-Agut.

That match led Murray to say he would do all he could to prolong his career but Monday's operation may mean he is not fit in time for Wimbledon, where he had thought of making his farewell to tennis.

Monday's operation was the second time Murray had undergone surgery in the past 12 months after a first operation failed to ease the pain in his hip.

Ahead of this latest bout of surgery, Murray spoke to US doubles specialist Bob Bryan, who has just returned to the game following the same procedure last year.

Bryan urged Murray to have similar surgery, although the greater physical demands of singles compared to doubles, mean there is no guarantee this operation could help the British tennis great to regain a place among the world's top players.

Dr Edwin Su, who operated on Bryan, though, told Britain's Mail on Sunday: "I think it would absolutely be able to help him. Ideally, it is with no pain. Most of the time, right away from the time they wake up from the surgery, patients say that the pain is gone."

Su, however, added: "What is unknown in elite athletes is whether they can return to sport...Singles is much more strenuous than doubles. It's uncharted territory.

Meanwhile Bryan, 40, said of Murray's position: "I just represent an option for him. That guy does everything you can possibly do as far as training and rehab."

Murray made a long-awaited comeback at Queen's last year but then pulled out of Wimbledon.

He underwent an extensive rehabilitation period in Philadelphia, followed by pre-season training in Miami might prove the answer, but the Australian Open showed he was still suffering significant pain while on court.