Top seed Serena Williams clinched her 19th grand slam title with a 6-3 7-6(5) victory over Maria Sharapova in the final of the Australian Open on Saturday.

It was Williams' sixth title at Melbourne Park and it moved her into a tie with fellow American Helen Wills Moody in third on the all-time list after she joined Martina Navratilova and Chris Evert on 18 at last year's U.S. Open.

Only Australia's Margaret Court (24) and Germany's Steffi Graf (22), who holds the record for the Open era, have more grand slam singles titles than the 33-year-old American.

Williams had not lost to Sharapova since the 2004 WTA Finals, a run of 15 successive victories and was not about to let the Russian end that streak on Saturday.

After Williams snatched a break in the first game, rain forced the players off court in the sixth for 12 minutes as officials closed the roof with the American serving at 3-2 and the score locked at 30-30.

Williams, who has been battling a cold and cough the entire tournament, chose to head inside during the break while Sharapova waited courtside.

She returned to Rod Laver Arena hacking like a seal and appeared to be gasping for breath, but then reeled off the next six points to establish a 5-2 lead.

While Sharapova managed to break in the next game she was unable to consolidate and Williams broke to love to seal the first set in 47 minutes.

Williams did not concede a point on serve until her third game of the second set while Sharapova struggled and was fighting to stay in the match.

Even when she had break opportunities in the fifth and seventh games the American simply reached back and smashed down a succession of massive serves.

Williams held a match point in the 10th game only for the Russian, who saved two match points in the second round against qualifier Alexandra Panova, to blast a forehand down the line.

The American held two further match points in the tiebreak and thought she had sealed the title when she belted an ace only for umpire Alison Lang to call a let.

Williams stood there looking bemused but composed herself to repeat the shot, smacking her 18th ace to win the match.

Williams claims the title winning 7-5 in tiebreak. A stunning game from the American as she serves an ace to wrap up the match.

Sharapova showing a lot of Character pushing the game to deuce but two powerful serves seals it for Williams. Williams 6 Sharapova 5

A terrible shot hit wide from Sharapova gives Serena the championship point but an equally stunning winner from the Russian saves it. She continues her good work to hold on to her serve. Williams 5 Sharapova 5

Easy game for Sharapova despite a double fault. Williams 4 Sharapova 4

Another attempt to break into Williams serve turns futile for Sharapova. Sharapova takes it to deuce with a stunning forehand winner and another to get the break point but some superb serves from Serena ensures she has the game. Williams 4 Sharapova 3

Sharapova gets into a 30-0 advantage before Williams unleashes some stunning shots to force a breakpoint. Sharapova manages to save the crucial point and then hold on to her serve. Williams 3 Sharapova 3

Williams takes the game but not before passing through some anxious moments. The Russian trying hard to gain the advantage but Williams keeping her at bay. Williams 3 Sharapova 2 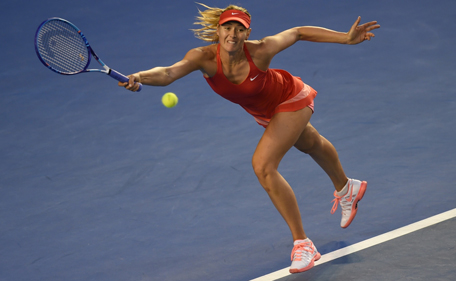 Russia's Maria Sharapova plays a shot during her women's singles final against Serena Williams of the US on day thirteen of the 2015 Australian Open tennis tournament in Melbourne on January 31, 2015. (AFP)

It's been an intense battle. Sharapova pulling off some stunning backhand winners as she holds on to her serve. Williams 2 Sharapova 2

Four straight points and Williams pockets the game without any fuss. The American seems to be in full control. Williams 2 Sharapova 1 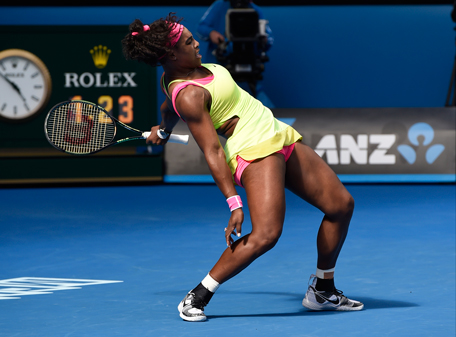 Serena Williams of the U.S. reacts after making a return to her compatriot Madison Keys during their semifinal match at the Australian Open tennis championship in Melbourne, Australia, Thursday, Jan. 29, 2015. (AP)

There is no stopping Williams. Playing in a different league she gains two break points. Two good serves from Sharapova including an ace takes the game to deuce. The Russian carries on the good work to claim the game. Williams 1 Sharapova 1

Williams serving with a lot of fire as she takes the first game of the second set without dropping a point. Sharapova has no answers. Williams 1 Sharapova 0

BREAK! Williams was unstoppable there. Gaining three breakpoints she converted the first one to wrap the first set. Sharapova 3 Williams 6

Serena puts the pressure on. Breaks Sharapova for the first set 6-3. #ausopen pic.twitter.com/B1CVIQYXeB


BREAK! Sharapova fights back immediately to earn herself triple breakpoints. Williams wiped out two but a double fault meant Sharapova wins the game. She is still a break down. Sharapova 3 Williams 5

BREAK! Sharapova is completely out of track as Williams gets a triple breakpoint advantage. She wins the first one to force another break. Sharapova 2 Williams 5

Serena breaks again for 5-2. Is she running away with this first set? #ausopen pic.twitter.com/XK4dz1TAGm

Williams facing stiff challenge from Sharapova before rain halts play for a brief while. She also seems to be struggling but still manages to hold on to her serve. Sharapova 2 Williams 4

Serena appears to be in some discomfort as she coughs and goes back into the tunnel while Sharapova is ready to go.

Sharapova remained on court while the court was being mopped and roof came on while Williams went inside.

Rain has stopped play with Serena leading the first set 3-2 at serving at 30-all.

It is very light rain falling but roof is now getting closed #ausopen pic.twitter.com/u1em7uEWmS

Sharapova keeps her serve with no much fuss there. She looks to be getting into the groove. Sharapova 2 Williams 3

Sharapova threatened to break into Williams serve taking it to 30-all but two power-packed serves from the American meant she keeps serve. Sharapova 1 Williams 3

Sharapova gets her game going taking her first game. The Russian looks to be serving well slowly gaining the momentum into the game. Sharapova 1 Williams 2

Come at me! Do you think Maria will let Serena’s record get in the way of her focus tonight? #ausopen pic.twitter.com/F8PTDdwuxY

It's all going easy for Williams at the moment. Holds her serve easily to surge ahead. Sharapova 0 Williams 2

BREAK! Not the best of the starts for Sharapova giving a 0-30 advantage to Serena. But arranges herself well to take the next three points. Williams smashes a lovely crosscourt winner to push it to deuce. The American pulls it off to take an early break. Sharapova 0 Williams 1

A shaky start from #Sharapova sees #Serena get an early break to go up 1-0 in the opening set #ausopen pic.twitter.com/QqUsRfLA1O

The big match is here. Stadium packed to the brim as the players arrive.

One of the few players with the game to trouble Serena Williams, Maria Sharapova's decade-long losing streak to the American great is one of the more curious anomalies in women's tennis.

Sharapova was a 17-year-old sensation when she last beat Williams at the title-decider of her debut at the season-ending Tour Finals in 2004.

That win followed her Wimbledon triumph a few months earlier when she shocked the American top seed in the final, a result hailed as one of the greatest upsets in the modern era by tennis writers at the time. 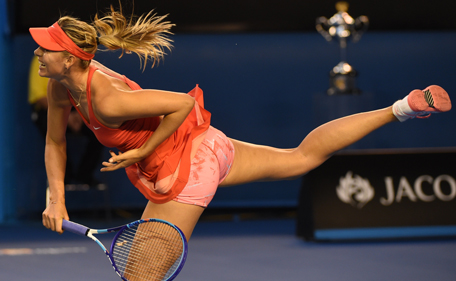 Russia's Maria Sharapova plays a shot during her women's singles final against Serena Williams of the US on day thirteen of the 2015 Australian Open tennis tournament in Melbourne on January 31, 2015. (AFP)

It has all been one-way traffic since with Williams notching 15 successive victories on all surfaces, a record that Sharapova has been reminded of, again and again, before her bid to break the streak in the Australian Open women's final on Saturday.

"I go into matches where I've beaten opponents and I don't want to focus on that because I don't want to get overly confident going onto the court," Sharapova said on Friday.

"But also it's tough knowing... that she has such a powerful game and I've had trouble against her.

"On the other side, when it's a final situation and knowing I'm a big competitor, I'll do everything I can to try and win the match."

Surprisingly, on paper, the defeats have not been hard-fought, as befits two of the toughest and most accomplished players in the women's game over the past decade. 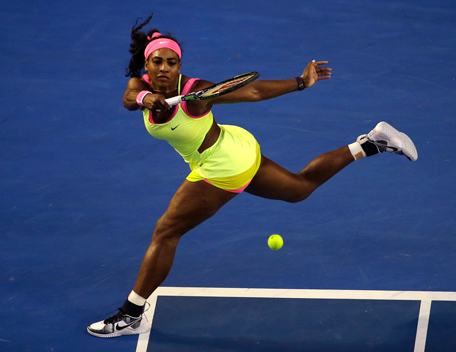 Serena Williams of the U.S. chases down a shot to Maria Sharapova of Russia during the women's singles final at the Australian Open tennis championship in Melbourne, Australia, Saturday, Jan. 31, 2015.  (AP)

Williams has often been known to drop a set here or there to far lesser opponents and crash out altogether at the Grand Slams, including her shock loss to Spaniard Garbine Muguruza in the first week of the French Open last year.

Against Sharapova, however, of their last 10 meetings only the 2013 final at Miami went to three sets, meaning the American always keeps her racquet sharpest for the Russian.

Both share the powerful ground-strokes and mental toughness of multiple Grand Slam champions.

They also have similar backgrounds, raised in humble circumstances and pushed into tennis by strong-willed fathers determined that they will succeed on the professional tour.

Away from the tour, the similarities disappear.

The pair have never been close and their personal differences exploded in the public sphere in 2013 when Sharapova made a tit-for-tat snipe at Williams' relationship with her coach Patrick Mouratoglou. 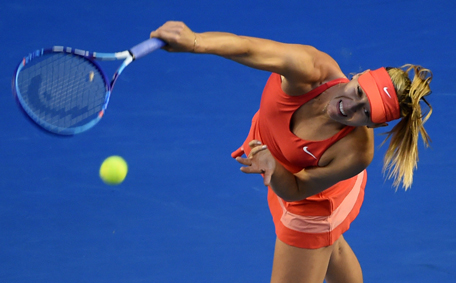 Russia's Maria Sharapova serves during her women's singles final match against Serena Williams of the US on day thirteen of the 2015 Australian Open tennis tournament in Melbourne on January 31, 2015. (AFP)

"If Serena wants to talk about something personal, she should talk about her relationship and her boyfriend that was married and is getting a divorce and has kids and not draw attention to other things," Sharapova told reporters before Wimbledon.

Williams has other incentives to keep the streak alive. A sixth title at Melbourne Park would have her move past Chris Evert and Martina Navratilova's record of 18 Grand Slam win and match American Helen Wills on 19.

From there, she would have a genuine shot at reaching Steffi Graf's professional-era record of 22 titles. Australia's Margaret Court holds the record across all eras with 24. Serena Williams of the U.S. loses balance as she plays a shot to Maria Sharapova of Russia during the women's singles final at the Australian Open tennis championship in Melbourne, Australia, Saturday, Jan. 31, 2015. (AP)

Williams would also become by far the oldest woman to win at Melbourne Park in the professional era, eclipsing the retired Li Na's effort last year at the age of 31.

A cold has been troubling her all week and she delayed a training session early on Friday before coming out for a hit later in the afternoon.

"I wasn't feeling really well," she said. "I got better, then I got worse this morning.

"It went well this afternoon, I felt better."

Sharapova is unlikely to take any comfort from that, having seen a gravelly-voiced and coughing Williams blow away her previous opponents at Melbourne Park.