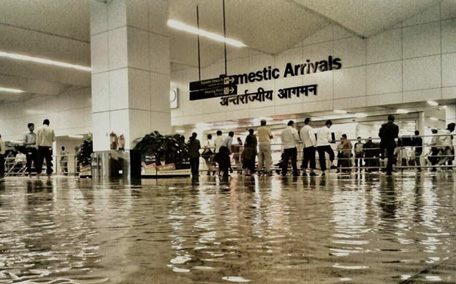 Heavy rains pounded parts of north India Monday, resulting in the deaths of at least 26 people, as the annual monsoon covered the country nearly two weeks ahead of schedule, officials said.

The Press Trust of India put the death toll at 30 and a government minister in the rain-ravaged state of Uttarakhand told AFP the number of people killed in the region was likely to be higher.

Surprise showers struck the capital New Delhi over the weekend, flooding the arrival halls in the international and domestic airports and leading to traffic snarls in parts of the city.

"Twenty-six people have died and more than 50 persons are missing, due to flooding, landslides and building collapses caused by heavy rain," Piyush Rautela, director of Uttarakhand's disaster management centre, said.

"The toll could be much higher but we do not have authentic data as communications networks are down and people are trying to save their own lives," Arya told AFP in local capital Dehradun.

Television stations broadcast footages of multi-storied buildings crashing and then being washed away in the swirling  waters of Mandakini river.

Dehradun received a record 220 millimetres (8.7 inches) of rain in a 24-hour-period on Sunday.

River water levels are continuing to rise across the state, clogging roads and leaving hundreds of pilgrims stranded on their way to visit Hindu shrines, officials said.

Four people died and five others are feared dead due to landslides in the neighbouring state of Himachal Pradesh, a local police official told AFP by telephone.

"A family of five, including three children were buried alive when boulders fell on their house in Chagaon village of Kinnaur," G.Shiva,  police chief of Kinnaur district, said.

In Nepal, a woman was swept away on Monday in a river while rain-fed floods damaged 25 buildings, officials said in capital Kathmandu.

"This is the first time that the rains have covered the country so early. Before this, the earliest was on June 21, 1960," B.P. Yadav, director of the India Meteorological Department.

The early onset of the annual monsoon has boosted hopes for the country's farming sector and its slowing economy.

The rains that lash the subcontinent from June to September are dubbed the "economic lifeline" of India, one of the world's leading producers of rice, sugar, wheat and cotton.

The weather department has forecast India will receive normal rains this year, raising prospects of a stronger performance by Asia's third-largest economy.

Last year India got below-normal rain in the first half of the wet season. The rains picked up in some areas later, but large areas of west and south India did not benefit.

The monsoon will be crucial for parts of Maharashtra state, India's biggest sugar-producer, which have been reeling from the worst drought in over four decades.

Agriculture contributes about 15 percent to gross domestic product but the livelihood of hundreds of millions of Indians living in rural areas depends on the farming sector.

A good monsoon is also vital for the ruling Congress party ahead of elections due in 2014 as it struggles to kickstart growth in the country of 1.2 billion people. (AFP)